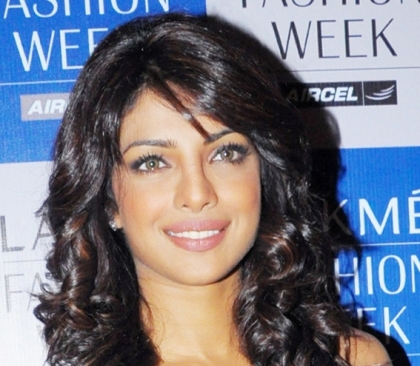 Bollywood actress Priyanka Chopra has surprised her fans by posing on the sensational cover of Vogue magazine. The actress has flaunted her fit abs, while wearing a monochrome bikini. In this new avatar, the star can easily be tagged as the hottest cover girl of this month.

Chopra is not usually seen in bikinis and her recent appearance on the cover has actually surprised everyone. With the launch of her new single ‘In My City’, the actress has managed to gain the status of an international singer. The ‘Barfi’ actress’ appearance on Vogue has made her even more prominent in the glamour world.

Priyanka, for the shoot, had worn a Shivan and Narresh Swim suit and her hair had been styled with a back-combed top. This hairdo has given an illusion of a bouffant. In regards to make-up, the ‘Agneepath’ star has sported bold eyes, with winged eyeliner. This has made her eyes look big and attractive.

The ‘Ra: One’ actress has also sported stylish nails, which were painted in a monochrome design. The magazine has described the actress as “Actor, Beauty, Rebel and Rockstar”. Priyanka is now one of the most busiest actresses in the Indian film industry. Priyanika will soon be seen in the remake of the classic movie ‘Zanjeer’ and will also be seen in upcoming movie ‘Gunday’.