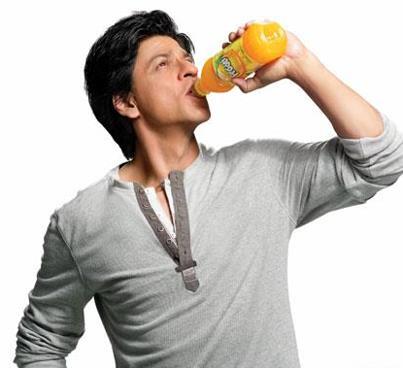 Bollywood super star Shahrukh Khan has been roped in as the brand ambassador for the Indian soft drink brand Frooti. The brand is a rival to another popular brand Slice, which is being endorsed by Bollywood actress Katrina Kaif.

However, Kaif said that she believes in taking the competition in the right spirit. The ‘Ek Tha Tiger’ star has been endorsing the brand since the year 2008 and also considers both drinks to be different. Katrina, in an interview said, “I think they are very different brands, and I see them as having different messages in terms of their marketing. Everything you do in the market will have opponents, that is why the competition is so high”.

The ‘Jab Tak Hai Jaan’ actress added that the consumer feels that they deserve the best, which is why these companies indulge in such a large amount of marketing for every product. Kaitrina went on to say that the end of the day, the choice lies with the consumers themselves.

The ‘Dhoom 3’ star features in a TV commercial for Slice. In an earlier commercial, Kaif had shown her seductive side and playful nature. On the other hand, Shahrukh has shot with children for the Frooti brand.