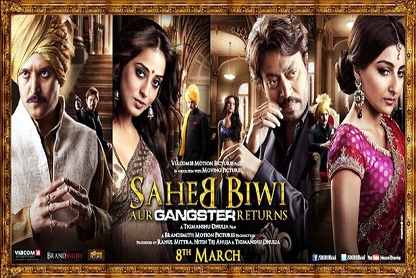 The followup movie of the Bollywood flick ‘Saheb Biwi Aur Gangster’ has been released on March 8, 2013. Tigmanshu Dhulia has made a unique blend of a revenge drama, with the added spice of political satire, along with a double love triangle. He has managed to bundle all of this into a dark thriller.

The filmmaker has come up with an original script and the story continues from where the first part had ended. The first movie ends when Mahie Gill, who plays the role of Madhvi, kills Babloo, who played by Randeep Hooda. Madhvi then taken to politics and seals sympathy votes in her favor, to be elected as the MLA from her territory.

The characters in the movie have been well carved and none of them have been wasted. All the actors have done a commendable job with the flick, especially Jimmy Shergill, who has excellently portrayed the frustrations of a man who is confined to a wheel chair.

Some may find that the drama in certain places becomes too much to handle. It can be said that the sequel is slightly better than the first movie, even though the flick did not click at the box office.