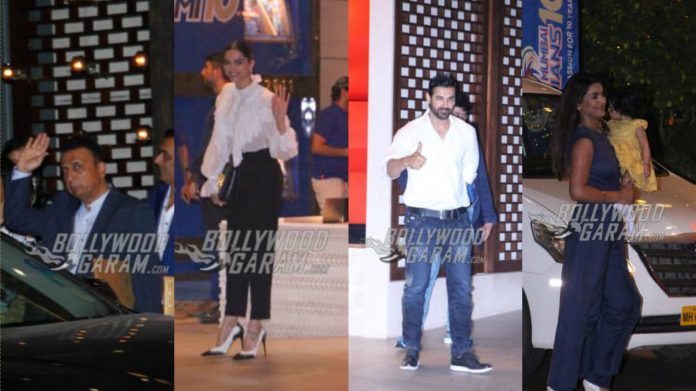 Celebrities from Bollywood and cricket were seen attending Mukesh Ambani’s party thrown for the team members of the Indian Premiere League team Mumbai India. The Mumbai Indians defeated the Kolkata Knight Riders at the Wankhede Stadium in Mumbai on April 9, 2017.

Deepika looked great as she was seen in a Dolce and Gabana top and a Balenciaga pants and waved for the shutterbugs. The win of Mumbai Indians was a good reason for celebration with family and friends. Harbhajan and Geeta brought their little daughter Hinaya, who looked adorable in a yellow dress. Singh and Basra got married in 2015 and were blessed with a baby girl in 2016. The couple, since the birth of their daughter has been sharing her pictures on the social media.

Harbhajan has not just been active in cricket but has also been seen in various other activities. The cricketer also shot for the reality TV show Roadies Rising and also made a comment on Anushka Sharma and Virat saying, “Virat-Anushka and all other cricketers who’re in a relationship should go ahead and marry each other soon. Though they’re the ultimate decision makers but I’ll be happy to see them settled. Zaheer Khan should get married this year itself.” The Indian Premiere League is currently in its tenth season that started on April 5, 2017 and is scheduled to finish on May 21, 2017.