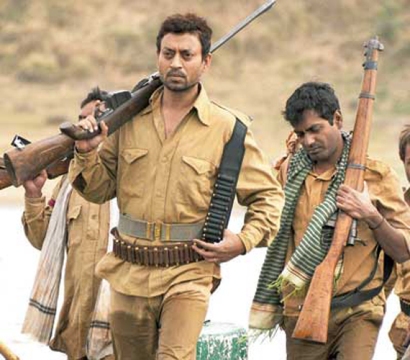 The Bollywood movie ‘Paan Singh Tomar’, made by Tigmanshu Dhulia, has won the Best Picture Award at the 60th National Film Awards on March 18, 2013. The movie stars Irrfan Khan and is based on the real life event of an athlete who became a dacoit.

Apart from Bollywood movies, other flicks from the Malayalam film industry and Marathi cinema were also a part of the main categories this year. The Bollywood movie ‘Vicky Donor’, which was produced by John Abraham, claimed the Best Popular Movie award. The other actors from the movie Dolly Ahluwalia and Annu Kapoor won awards for the Best Actors in supporting categories.

Filmmaker Sujoy Ghosh won the award for Best Original Screenplay Writer for the Vidya Balan starrer ‘Kahaani’. The Akshay Kumar flick ‘Oh My God’ won the in the Best Adapted Screenplay category for Bhavesh Mandalia and Umesh Shukhla. The Bollywood movie ‘Kahaani’ was also adjudged the Best Edited Movie of the year for Namrata Rao’s work. The track ‘Bolo Na’ from ‘Chittagong’ won the award for the Best Lyrics for Prasoon Joshi’s work and the Best Male Playback singer award was taken by Shanker Mahadevan.