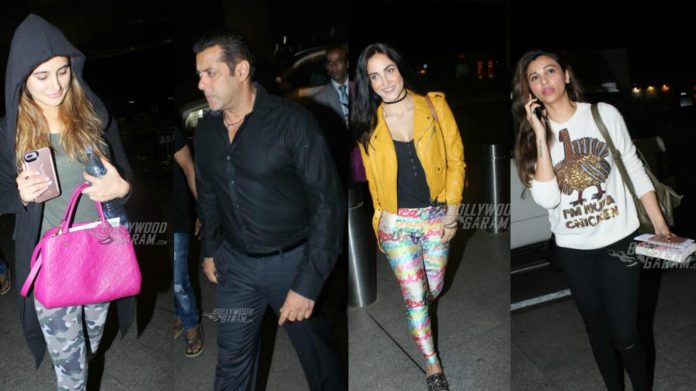 The Dabangg Tour has officially been kicked off! For the next few weeks superstar Salman Khan will be touring Melbourne, Sydney in Australia, Auckland in New Zealand and Hong Kong all through April this year as a part of his first ever tour. Titled DA BANG – The Tour, it’s organized by The Chocolate Room and will also see Bollywood stars like Sonakshi Sinha, Bipasha Basu, Prabhudeva, Elli AvRam, Daisy Shah, Nargis Fakhri, Badshah and Manish Paul join Salman Khan over the course of the tour. The tour kicks off with the first performance in Hong Kong on Sunday April 16, 2017 and ends in Melbourne, Australia. As reported by several sources, brother Sohail Khan will be spearheading the Dabangg Tour as Salman Khan’s manager. Moving on, Sohail will manage all of Salman’s affairs, from movies, performances to endorsement.

Here are the official tour dates for Dabangg Tour 2017 –

For the first time, Salman Khan will be performing live to his hit songs at this tour along with singing hit songs from movies like Maine Pyaar Kiya, Bodyguard and Sultan. The 51 year old Bollywood superstar is all geared up to make this a once in a lifetime experience with larger than life sets, opulent costumes, brilliant musicians and dancer!

Meanwhile, the Malaysia part of the of the international tour have been postponed due to unknown reasons. Earlier this month, Salman Khan tweeted to his fans breaking news of re-scheduling the Dabangg Tour for Malaysia citing reasons that the organizers requested so. Hence, the Dabangg Tour in Malaysia will now happen in July 2017.

Moving on to the Bollywood star’s airport looks – Bipasha Basu looked stunning in a black jumpsuit paired with a blush pink shrug. She was seen traveling solo as she will not be accompanied by her husband, Karan Singh Grover on Salman Khan’s Tour. While Salman Khan himself too sported an all black look at the airport while brother Sohail kept it pretty casual in a black T-shirt and grey joggers. Popular TV host Manish Paul, who will also be joining Salman on his tour sported a neon blue tank top paired with black jeans and Khakhi shoes. Elli AvRam chose to sport neon leggings with a bright yellow jacket while Nargis Fakhri kept it extremely casual with a hoodie, military green leggings and top. Lastly, Sonakshi Sinha rocked her summer look in a simple yet elegant white midi dress.