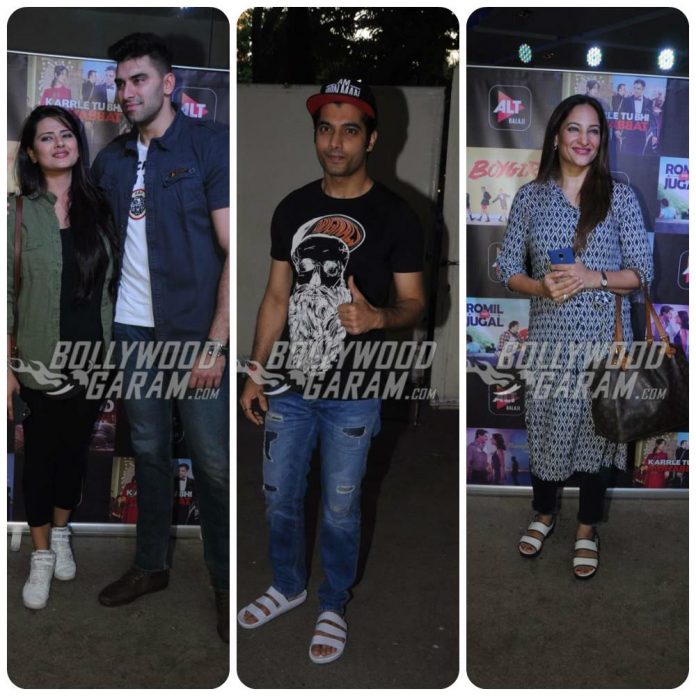 Hiten Tejwani, Kratika Sengar, Nikitin Dheer and others hit the red carpet for the special screening of Dev DD

Celebrities from Bollywood gathered for the special screening of the upcoming show Dev DD held in Mumbai on April 16, 2017. Dev DD is one of the many shows launched by Ekta Kapoor on her new web series app ALT Balaji. You can also catch full episodes of all the shows that are exclusively televised, on ALT Balaji’s YouTube channel. The other shows launched included Romil and Juggal, Karrle Tu Bhi Mohabbat, Bewafaa Sii Wafaa, Boygiri and The Test Case.

The screening event saw the presence of Hiten Tejwani, Gauri Pradhan, Kratika Sengar, Nikitin Dheer, Adaa Khan, Rakshanda Khan, Manini De Mishra, Sharad Malhotra, Sahil Uppal, Arjun Bijlali and others. The new show on Ekta Kapoor’s channel is directed by Ken Ghosh and has depicted Devdas in a modern way with a gender reversal. It stars Aasheema Vardhan, who was also present for the screening.

The channel also has other shows like Karrle Tu Bhi Mohabbat that has brought together the popular onscreen couple Sakshi Tanwar and Ram Kapoor. The fans are excited to see their favourite couple once again. Actress Nimrat Kaur will be seen showing off some action on the show The Test Case.

The idea of creating an online platform for shows is because content can be viewed freely, without having censors and being open to Indians who live in the country as well as abroad. The reach for shows has widened, because the topics being covered are meant for the millennial generation that are ready to embrace such topics. This comes alongside a number of other popular portals like Netflix and Amazon Prime Video, that allow users to watch fresh content at a subscription price.