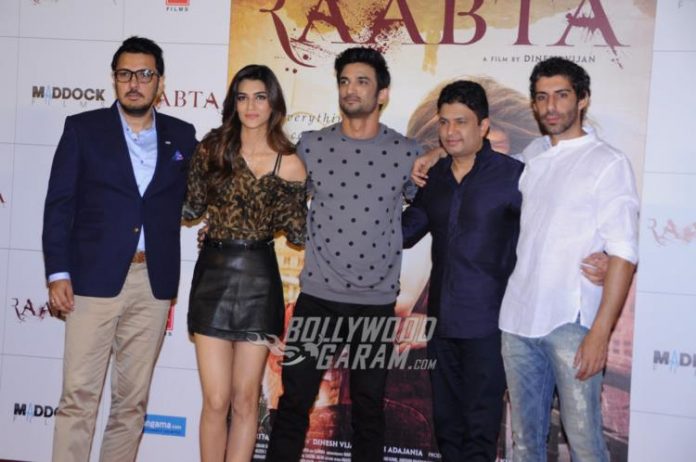 Kriti Sanon and Sushant Singh Rajput talk about their experience with director Dinesh Vijan, who had the story in mind for a long time

Actors Kriti Sanon and Sushant Singh Rajput launched the trailer of their much-awaited upcoming flick Raabta at an event in Mumbai today, April 17. The trailer has shown some crackling chemistry between the protagonists Kriti and Sushant, who are rumoured to be a couple in real life as well.

Going by the first glimpse of the movie, it looks like it is a love story depicted in two different eras. Filmmaker Dinesh Vijan and actor Jim Sarbh were also present at the launch event. Dinesh shared his joy of finally making a movie that he had in mind since a long time. Kriti, while talking about Raabta, said that it is about the feeling of belongingness and that we many times feel while meeting a stranger.

The actress added that she felt a connection with the script when it was narrated by Dinesh and that was when she wanted to be a part of the film. Sushant on the other hand, said that he as an actor is selfish and would like the script to be exciting enough to be a part of it. The Kai Po Che actor that he was highly impressed the way the script was written and narrated by the filmmaker.

Kriti, at the launch event, looked pretty in a printed off shoulder top and a black skirt while Sushant looked great in a polka dotted pullover and denims. The actors in recent times have been in news for their impressive chemistry and are often seen spending time together off work. The Heropanti actress also shared a video on her Instagram account where she is seen indulging in a game of scrabble with co-star Sushant. Raabta is ready to hit theatres on June 9, 2017.