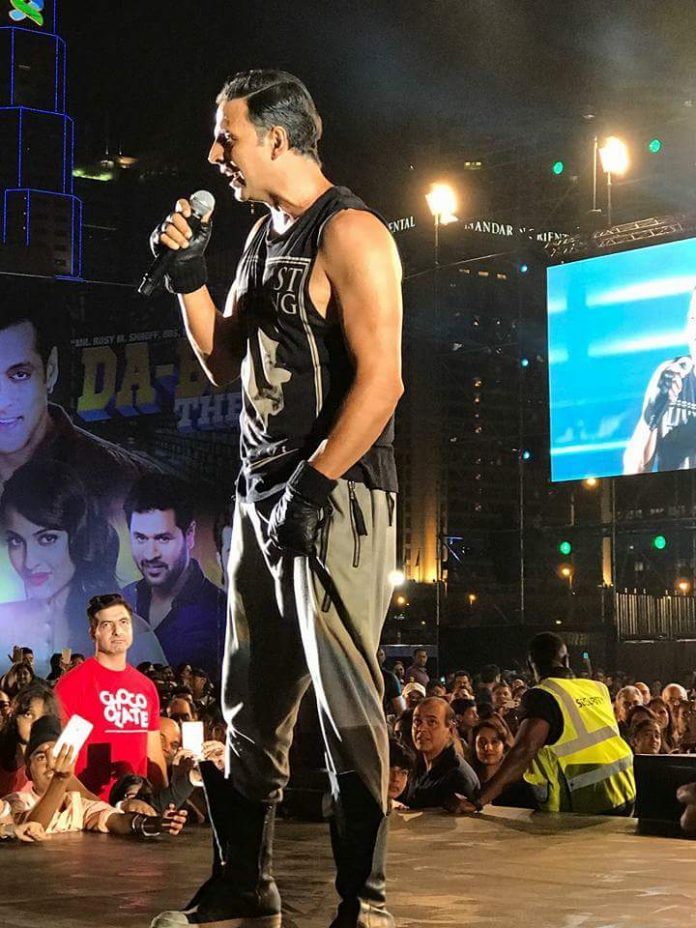 Superstar Salman Khan kicked off the much awaited Dabangg Tour with his first concert in Hong Kong on April 16, 2017. While the presence of several Bollywood celebrities including Bipasha Basu, Sonakshi Sinha, Daisy Shah, Nargis Fakhri, Manish Paul and Salman Khan (off course) at the Hong Kong Dabangg Tour was well known in advance, tour organizers kept Akshay Kumar’s performance under wraps. The national award winning actor flew down to Hong Kong early in the morning and was escorted to the concert’s venue in a hushed manner.

On arriving at the venue, Central Front Event Space, Akshay Kumar rehearsed to non-stop to a medley of hit songs along with other performing stars for the show at night. His entry on a bike on stage was undoubtedly one of the biggest highlights of the evening! Fans went berserk when Akshay made a surprise entry on stage. Moving on the rest of the performances for the evening – Salman Khan performed to romantic numbers along with Bipasha Basu, Sonakshi Sinha, Daisy Shah and Elli AvRam. There was even a quirky segment featuring Salman Khan and Manish Paul with the latter asking him questions. The grand finale of Hong Kong Dabangg Tour saw all the stars perform together amongst an uncontrollable and uproarious crowd.

However, Akshay Kumar will not be a part of the rest of the tour which goes from Auckland, to Sydney to Melbourne. But we are pretty sure that show organizers, The Chocolate Room would definitely have a few more surprises in store for us!

Check out all the fun from Hon Kong Dabangg Tour 2017 right here, starting with a video of Akshay Kumar’s bike entry –