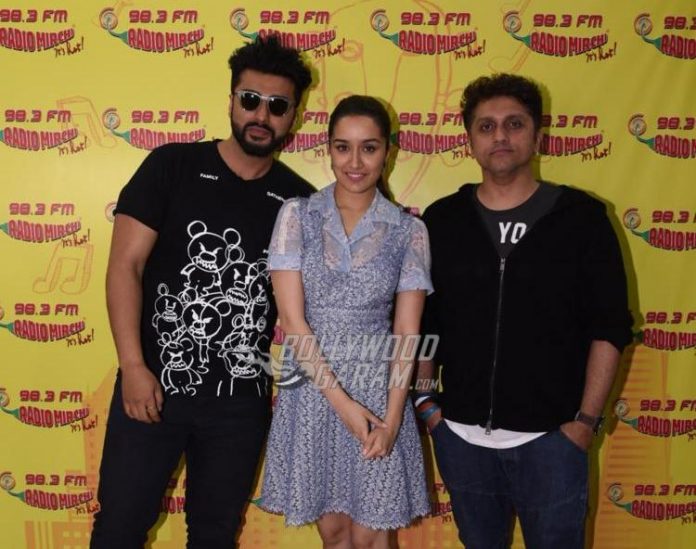 Bollywood co-stars Arjun Kapoor, Shraddha Kapoor and director Mohit Suri promoted their upcoming movie Half Girlfriend at the Radio Mirchi Studios in Mumbai on April 18, 2017. Arjun and Shraddha looked great in casuals. The Aashiqui 2 actress appeared in a pretty blue outfit with nude pumps, while Arjun appeared in a black t-shirt and denims, matching his director as they seemed to have chosen a monochrome theme for their promotion.

The promotions for the upcoming romance flick have begun. The makers are trying their best to touch every platform so as to reach the maximum audience. Half Girlfriend is adapted from the bestselling book by Chetan Bhagat, of the same name. It tells the story of a vernacular boy who gets admission into a top university in Delhi. He then meets a high-class girl and the two begin what can be called a Half Girlfriend relationship. Arjun Kapoor has worked on another big screen adaptation of Chetan Bhagat’s other bestseller, Two States.

This is the first time Shraddha and Arjun have teamed up for a movie and it will be a fresh change for the audience. The trailers for the movie have already been released and are on wide circulation. The audience seems to be loving the chemistry between these two actors. And already two songs from the flick have been released, with Baarish topping the charts.

Half Girlfriend starring Arjun Kapoor and Shraddha Kapoor and adapted from the bestselling book by Chetan Bhagat will hit theatres on May 19, 2017. We are so pumped for this one!