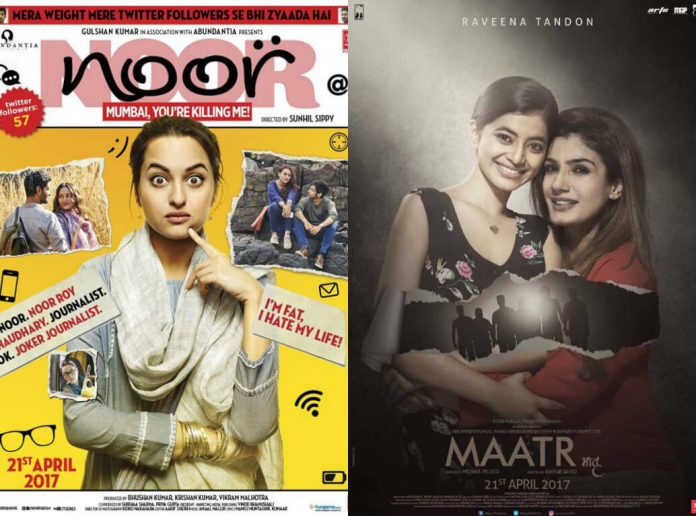 Both Maatr and Noor are women centric films with Raveena Tandon and Sonakshi Sinha in lead roles respectively, and hit theaters on April 21

After much controversy around CBFC’s alleged refusal to pass Raveena Tandon’s comeback movie Maatr, the Censor Board gave the movie go with three cuts today. As reported by Bollywood Garam previously, lead actress Raveena Tandon lashed out against the Censor Board on social media for their refusal to pass the film with the graphic content it shows. In an interview with a leading daily she said, “The Censor Board is bound by archaic laws which need to change according to the current times. Maatr is a story that needs to be told. Enough of sugarcoating harsh realities! We will remain indifferent to brutality, and rape will remain a taboo [topic].”

The hard hitting film deals with the issue of rape and all forms of violence against women in our society. Previously, the censor board refused to pass the film as it is due a rape scene in the movie which the thought to be too bold for Indian audiences. They asked to reduce the length of the rape scene from 13 minutes to three or four minutes in the movie. Makers of the film gave into the Censor Board and submitted the revised film with three cuts and one general audio cut, post which the movie was cleared for release this Friday.

Moving on to Sonakshi Sinha’s Noor, this film too was subject to cuts and beeps by the CBFC. As reported by Bollywood Garam previously, the Censor Board demanded to mute certain words like ‘Dalit’, ‘Sex Toy’, a reference to Barkha Dutt and a liquor brand’s name from the movie. The board demanded that ‘Sex Toy’ be replaced with ‘adult site’, as they thought the former could be a shock for Indian audiences.

In an interview with ToI, Noor director Sunhil Sippy said that they have accepted the CBFC’s cuts as it does not affect the narrative in any way. “We were told the use of Dalit is in reference to a community so it’s asked to be removed. We have got U/A certificate,” said Sunhil.  Noor is based on a novel by Pakistani writer Saba Imtiaz titled, Karachi, You’re Killing Me!