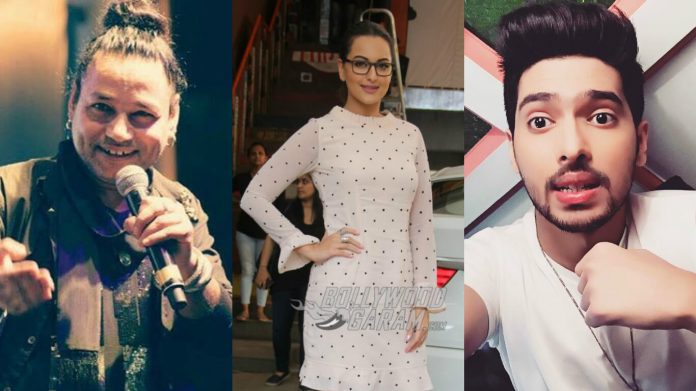 Looks like our Bollywood celebrities are more excited than legit fans over the arrival of international pop sensation, Justin Bieber on his tour of India. So much so that they want to elbow the other out so they can get a chance to share the stage with the Love Yourself hit maker.

Yesterday, Bollywood Garam reported how famed Indian singers Kailash Kher and Armaan Malik locked horns with Sonakshi Sinha. The latter was rumoured to be performing at Justin Bieber’s Purpose Tour concert in Mumbai. Kailash Kher immediately raised objection to this, saying on social media, “It doesn’t give a good message internationally…Whenever any singer from the West comes to India, we get an actor on board to match their level. We don’t get a singer for another singer, but an actor. Event managers and producers of the entertainment industry are so scared.”

Nodding in agreement to what can be stated as an unfortunate fact, fellow singer Armaan Malik also quipped on social media: “Agree with @Kailashkher sir! Actors are actors & singers are singers. Leave the stage & mic to us, that’s our playground not yours.”

Sonakshi Sinha was quick to respond to this indirect attack on her, and she shot back her own response to Armaan Malik, though during the argument, she mistook him for his brother, music composer Amaal Malik. She accused Indian singers of being “insecure” and said, “A secure artist would always encourage another artist to grow their skills and follow their dreams. Art in any form should not be suppressed.”

Armaan Malik did not waver from his stance about the position of Indian singers as compared to Bollywood stars who include themselves in events that gain them media attention, even if the event has little to do with their profession. He said, “It takes years of practice and devotion to be a professional. Be it acting, singing or any art for that matter. if you do something, do it well. Millions of singers are finding opportunities to work. Imagine how crushed they would feel when they see non-singers getting that chance?”

So, Sonakshi Sinha finally responded to the controversy. It should put an end to her involvement in the matter once and for all. Taking to Twitter, she posted a note that reads: “Firstly, I am not performing at the Bieber concert. It was speculated because I was approached and carried forward by publications and portals even after I stated in various interviews that it’s not happening. Secondly, I’m an actor who loves music, who loves to perform and who loves to sing. And if anyone has a problem with that, in the wise words of baba Bieber himself…they can go “love” themselves. Over and out.”