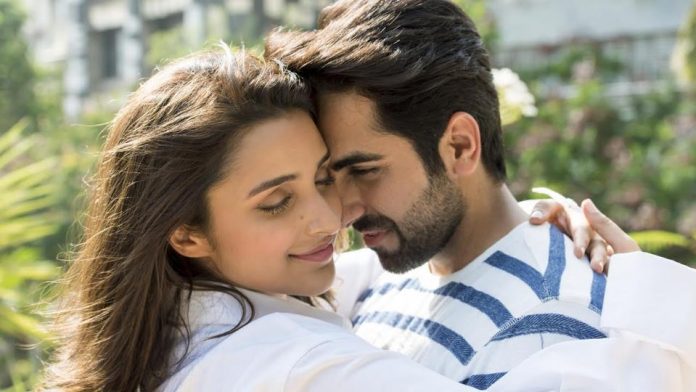 The fifth song from Meri Pyaari Bindu, Afeemi is out today!

Directed by Akash Roy, Meri Pyaari Bindu stars Parineeti Chopra and Ayushmann Khurrana as Bindu and Abhimanyu respectively. It is an Indian Hindi romantic comedy film, written by Suprotim Sengupta. The movie is a musical delight with comedy and conflicts. After releasing three songs which created a sensational buzz amongst the audience, the fourth one, Afeemi is out today.

The trailers and songs already show us about the actor’s role in the film but the song, Afeemi shows us a deeper relationship of the couple in a clear way. It is more of a softer and melodious kind of song.

In the first song, Maana Ke Hum Yaar Nahin, Parineeti displayed her extraordinary skills of singing. The second one, Haareya was based on more of Ayushmann Khurana’s character. The third song, Yeh Jawaani Hai Teri was about the couple going retro and dancing to the beats of 70s and 80s. While the fourth track from the film, Khol De Baahein is a Bengali – Hindi mix and is a compelling love song.

In Afeemi, we could see that how Parineeti aspires to become a singer and works hard for it, whereas Abhi supports her and encourages her. He stands with her in all her auditions and practices. He stays with her throughout her journey and motivates her. Their journey leads them from being best friends to being lovers. The song also shows their loving intimate moments and how Bindu achieves her dreams and finally have her own album displayed at music stores. Abhi desires to become a writer in the film but is struggling in his career. He is intensely and passionately in love with Bindu who also loves him. But Bindu also wants to be the nation’s sensational voice.

The song has been rendered by Jigar Saraiya and Sanah Moidutty. Kausar Munir, Priya Saraiya and Vayu have written the lyrics of the song and it has been composed by Sachin-Jigar. It will be compelling to see Abhi and Bindu’s love story unfold on May 12th, 2017.

Ayushmann has his two individual movies lined up, Bareilly Ki Barfi and Shubh Mangal Saavdhan, whereas Parineeti is busy in completing her schedule of Golmaal Again.