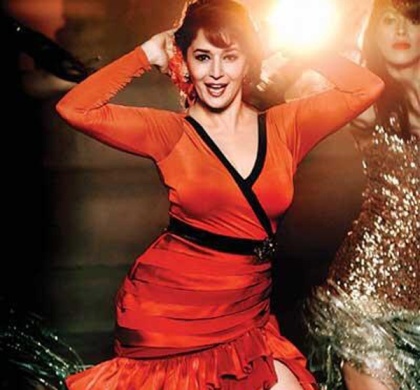 The makers of the celebrity reality show ‘Jhalak Dikhhla Jaa’ are all set to start another season and it seems like the upcoming show will see actress and judge Madhuri Dixit Nene in a new bold avatar. The judges of the show, which include Karan Johar and Remo D’Souza, have also shot a promotional video for the upcoming season.

The first look of the actress in the promotional video is out and it can be said that Madhuri is looking as she did in her early years as an actress. The ‘Devdas’ star was seen wearing a red flamenco dress with a high slit on the thighs. The promotional video has shown Madhuri doing a Cha-Cha, despite being trained in the Indian classical dance form Kathak.

The ‘Aaja Nachle’ actress has tried almost every dance form in her career, but this will be the first time she will be seen doing a Cha-Cha. Apart from the actress, Karan and Remo will also be seen doing a dance number. Johar is seen showing off his dance skills in the promo and it looked like he was having fun.

All the three judges were seen having fun while rehearsing the promotional video. At present, the ‘dhak dhak’ girl is busy shooting for the movie ‘Dedh Ishqiya’.