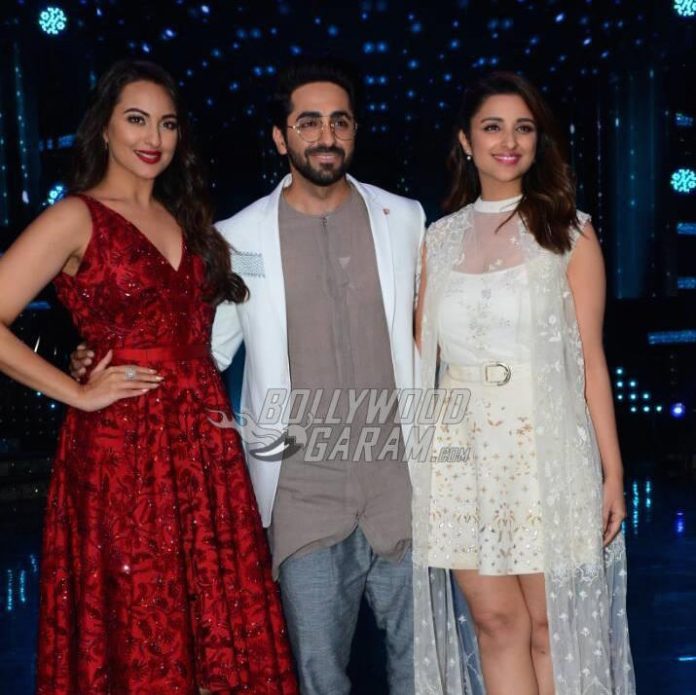 Sonakshi Sinha is back to the judge’s panel while Ayushmann, Parineeti promote Meri Pyaari Bindu on Nach Baliye 8 E10

Promotions of Meri Pyaari Bindu are on and what better platform can Parineeti Chopra and Ayushmann Khurrana get than Nach Baliye 8! The actors appeared on sets of Nach Baliye 8 Episode 10 for promoting their film on May 2, 2017. After a rib tickling series of trailers, Ayushmann and Parineeti are showing off their amazing chemistry at promotions.

But the highlight of the show was Sonakshi Sinha’s return as a judge to the sets! Last week it was being speculated that Sonakshi Sinha will be permanently replaced by Malaika Arora. But turns out, the switch was made to accommodate Sonakshi’s prior tour commitments. Sonakshi was able to make an early return to the show since Hrithik Roshan’s Durban tour has been postponed to May 12 (tentatively).

Moving on to episode 10, Parineeti looked pretty in a white outfit with a long shrug while Ayushmann looked stylish in a long shirt, white blazer and a pair of denims as the two promoted their upcoming movie. While Sonakshi looked absolutely stunning in a red asymmetric gown.

Going by the pictures, Ayushmann and Parineeti along with judges Sonakshi, Terence Lewis and Mohit Suri had a great time on while shooting. Lead actors of Meri Pyaari Bindu were seen shaking a leg with celebrity contestants and even sang a duet.

See the entire gallery from the shoot of Nach Baliye 8 Episode 10 featuring Ayushmann Khurrana, Parineeti Chopra and Sonakshi Sinha along with other contestants and judges –