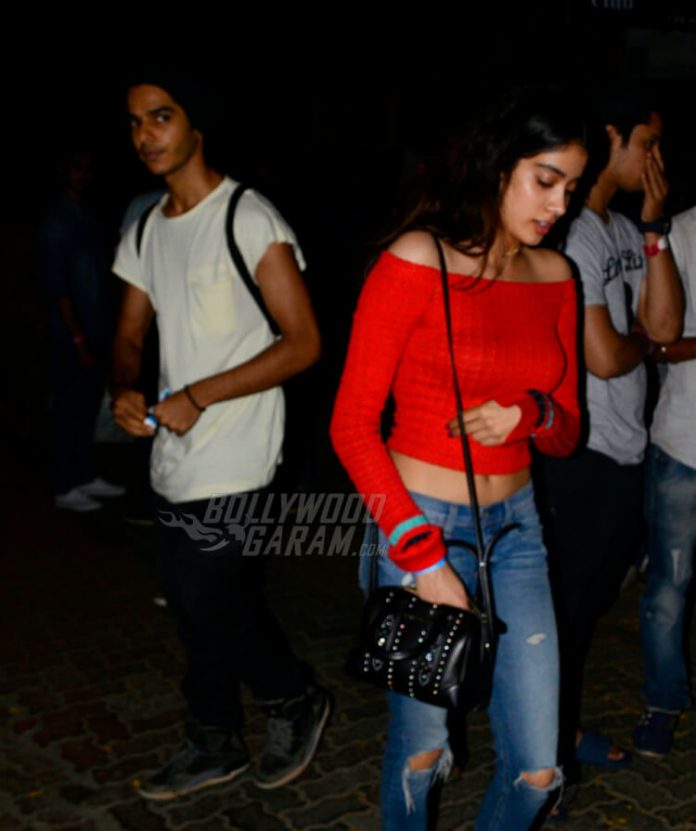 Seems like Sridevi’s daughter Jhanvi Kapoor and Shahid Kapoor’s brother Ishaan Khattar are getting to know each other better before they start working together on their debut film. It was widely speculated previously that Karan Johar would be launching the two famous star kids in his upcoming untitled project. While no official confirmation has been made by KJo or Dharma Productions yet, Jhanvi’s father Boney Kapoor confirmed earlier this year as he stated – “Yes, Karan has been talking to us about a film for Jhanvi and we’ve given consent. But we don’t know which project it would be. Since Karan has recently acquired the remake rights of Sairat it is being presumed that our daughter would be launched in this project.”

Jhanvi Kapoor had her style game on point as usual and was spotted wearing a red off shoulder crop top along with ripped jeans. While Ishaan Khattar kept is casual with a beanie and monochrome look. The two were spotted at a popular resto/ pub in Mumbai on April 30, 2017. The duo have often been spotted at restaurants and movie screenings together which sparked off dating rumors. However, it’s been reported that Jhanvi Kapoor is currently seeing long time boyfriend, Shikhar Sariya. Meanwhile, before Ishaan Khattar makes his Bollywood debut, he will be seen in famous Irani filmmaker, Majid Majidi’s Beyond the Clouds this year.

Stay tuned for regular updates on Jhanvi exclusively on Bollywood Garam. Meanwhile, check out our compilation of the best pictures of Jhanvi Kapoor.