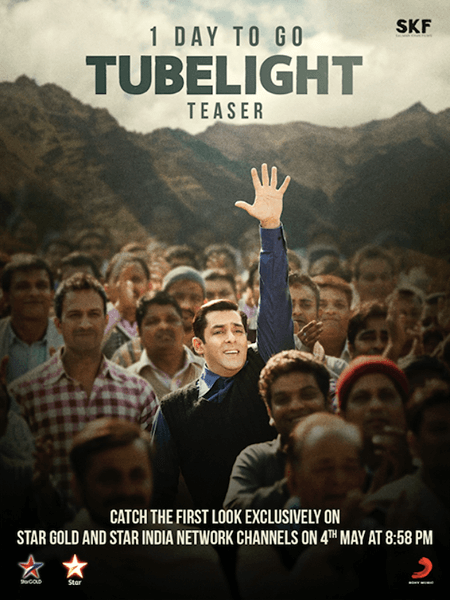 Salman Khan starrer, Tubelight’s trailer to be out on May 4 and fans are eagerly waiting for it

B-Town’s favourite hero, Salman Khan’s film Tubelight teaser is about to release on May 4, 2017 and his fans are not able to keep calm. The filmmakers too are trying to create a buzz around the film by releasing interesting posters of the film. After releasing a picture of Sohail Khan and Salman Khan together, the Tubelight team has posted another picture where Salman is seen in an excited mood, waving his hand to gain attention of someone amidst the crowd.

The film will show a never-before-seen avatar of Bollywood’s Dabangg star, Salman Khan. In the lead role of the film, to pair up with Mr. Khan is a Chinese actress, Zhu Zhu. The film also stars a young actor, Matin Rey Tangu and it will be interesting to see his bonding with superstar Khan.

With Tubelight’s teaser trailer release just a few hours away, here’s what we are expecting from it –

A Unique Storyline – A different storyline has always been the way of Kabir Khan’s films. Based on the Indo-China war of 1962, Tubelight tells the story of a simple man (Salman Khan) who goes in search of his lost brother (Sohail Khan) after the war. Sohail Khan makes a comeback after 7 years with Tubelight and the fans are excited to see the two brothers on screen once again.

Shah Rukh Khan’s Cameo – Shah Rukh Khan and Salman Khan under one frame in Tubelight has practically become the biggest news of the year. The fans of both the Khans are waiting to see their super stars share the screen after 10 years. Though, it is just a cameo, no one can miss it.

The Chinese Diva – Kabir Khan’s Tubelight does not have any Bollywood heroine as it’s female lead. Instead, Kabir has taken the Chinese actor, Zhu Zhu to play as the lead heroine. Zhu Zhu is an established actor. She has done Hollywood films like Shanghai Calling and The Man with the Iron Fists. It would be interesting to see how her Bollywood debut turns out to be.

The Little Guy – Matin Rey Tangu, the little star of the film has already become a hear throb. Fans are waiting to watch the chemistry between Salman Khan and the little guy and know more about their equation.