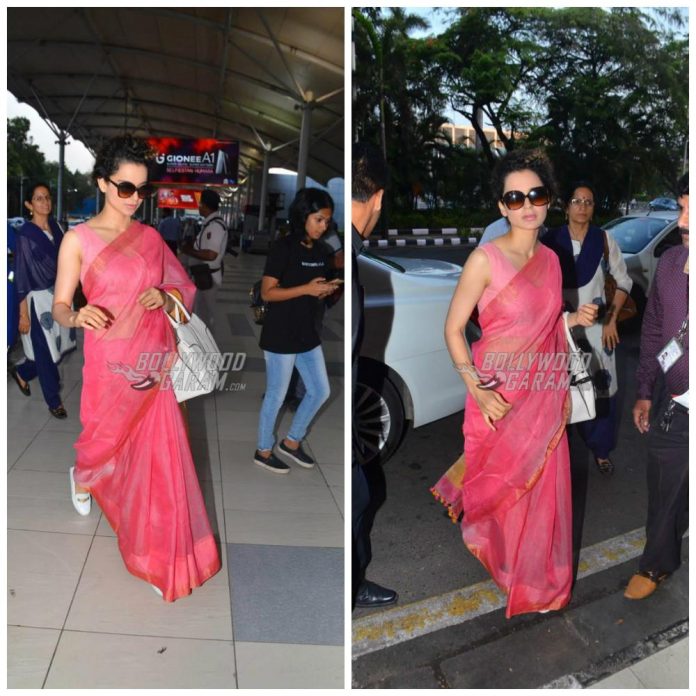 Kangana Ranaut is looking forward the release of her upcoming film, Manikarnika – The Queen of Jhansi in which she will be playing the role of historical figure Rani Laxmibai. The actress was seen at the Mumbai airport as she left for Varanasi. Kangana will unveil the 20 ft tall poster of the movie tomorrow, May 4 at an event at Dasashwemedh Ghat in Varanasi.

The actress preferred to go desi for her travel schedule and wore a pink sari. The actress in an earlier interview revealed that she learnt horse riding as a part of preparations for her role and added that they attended workshops to rehearse lines.

While talking to the media about living up to the legend of Rani Laxmibai, Kangana said, “I also want to do workshops to learn hand-to-hand combats, how to ride in a sari, with a baby tied to my back, fighting with two swords and holding the reins in my mouth. Nothing should look fake or forced which is why I haven’t set a time limit for when the film rolls. I want the script to come alive as beautifully and fiercely on screen.”

Earlier the movie was expected to be directed by Ketan Mehta but now Telugu director Krish has been roped in. Popular lyricist Prasoon Joshi has penned the songs as well as dialogues for the forthcoming historical. We are thrilled to learn about Kangna’s Manikarna, and are eagerly waiting for its release, aren’t you?

Manikarnika poster is out – see it right here!