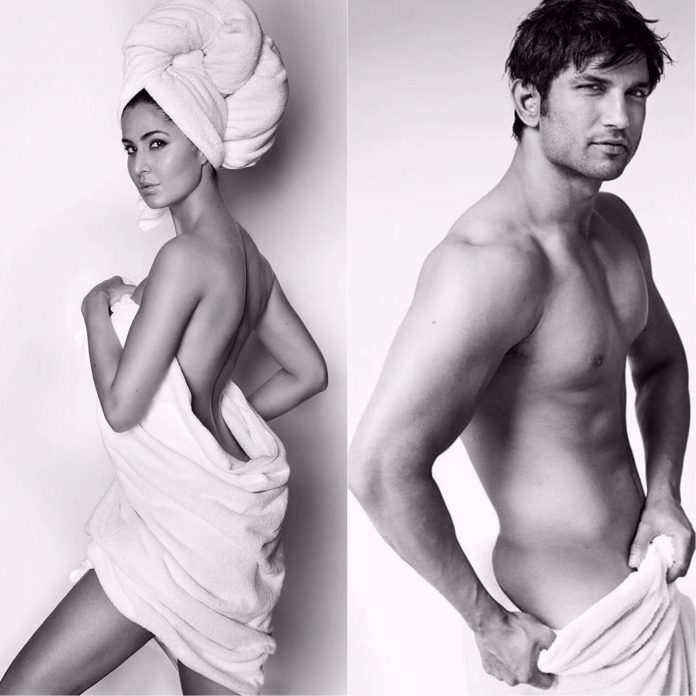 Sushant Singh Rajput’s new picture has taken the internet by storm (and this time he’s flashing a reasonable amount of booty!). After B-Town sensation Katrina Kaif, Sushant is the second Indian actor to feature in the famous towel series by renowned photographer, Mario Testino. Sushant Singh latest picture he strikes a sizzling pose as he bares his derriere, only half covered by a towel! His pose reminds us of John Abraham’s pose in Dostana in his comfy little trunks, but is definitely a classier version of it.

Sushant Singh indulged in towel play for this photoshoot by placing it strategically to cover only bare minimum. His chiseled body in the picture is worth drooling over! A lot of famous celebs have posed for the iconic, towel series and showcased their really hot bodies. It’s nice to see that Sushant has also become a part of the exclusive club.

Recently, Sushant Singh Rajput and Kendall Jenner did a sizzling photoshoot with Mario Testino for Vogue India’s upcoming issue titled Indian Affair. The images are dripping with sex appeal and seems like Sushant Singh is on his way to become the next international poster boy for India!

On the work front, the actor will be seen in Raabta opposite rumored girlfriend Kriti Sanon., Raabta is about past life connections between two characters played by Kriti Sanon and Sushant himself. After Raabta, Sushant will be seen in Chanda Mama Door Ke in which the actor would be playing the role of an astronaut. The film is about the first Indian who stepped on the moon. In 2018, Sushant will be seen as a RAW agent in the film, Romeo Akbar Walter, the acronyms of which are RAW and marks the first thriller film of his career.