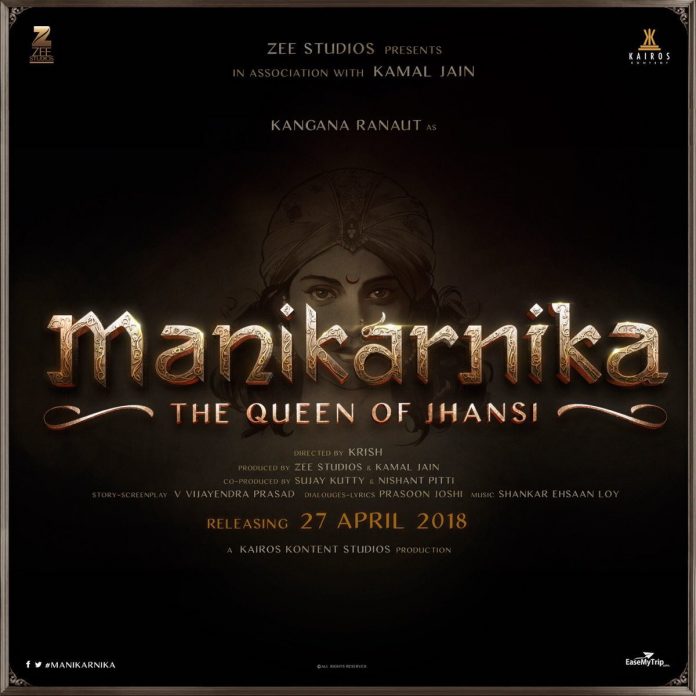 The much awaited Manikarnika poster is finally out and it’s as fierce as the Queen of Jhansi, Rani Laxmibai

As reported by Bollywood Garam on May 3, Kangana Ranaut flew down to Varanasi to launch a massive 20 ft poster of her upcoming biopic, Manikarnika – The Queen of Jhansi. The film is based on the life of legendary freedom fighter Rani Laxmibai and is slated to release in April 2018. Makers of the film chose to unveil the biopic’s poster in Varanasi as that’s Manikarnika aka Rani Laxmibai’s birthplace and serves as a perfect tribute to her.

The massive poster of Manikarnika is finally out and shows a fierce Kangana Ranaut ready to go to battle in the background, with the film’s title superimposed on her. She was joined by film director Krish, music director Shankar Mahadevan, singer Richa Sharma and lyricist Prasoon Joshi for the launch.

For the poster launch, Kangana Ranaut looked like a contemporary queen as she chose to wear a regal pink embellished saree paired with heavy traditional royalty inspired jewelry and tied her hair up in a net center parted bun. She paired the floral saree with a dazzling embellished blouse and let the neckpieces do all the talking – a good decision to keep earrings at bay!

Reportedly, to make her role look as realistic as possible, Kangana is undergoing massive training to learn horse riding, sword fight and other warfare skills before the shoot starts. The film is an Indo – British project and will be treated as a sequel to Aamir Khan’s Mangal Pandey – The Rising. It has also been reported that makers are trying to rope in British actor Hugh Grant to play the role of British General Hugh Rose who gave the order to secure Jhansi in 1858. It will definitely be interesting to see Kangana Ranaut in a completely different avatar in the film. But until then, enjoy the gallery from Manikarnika’s poster launch –