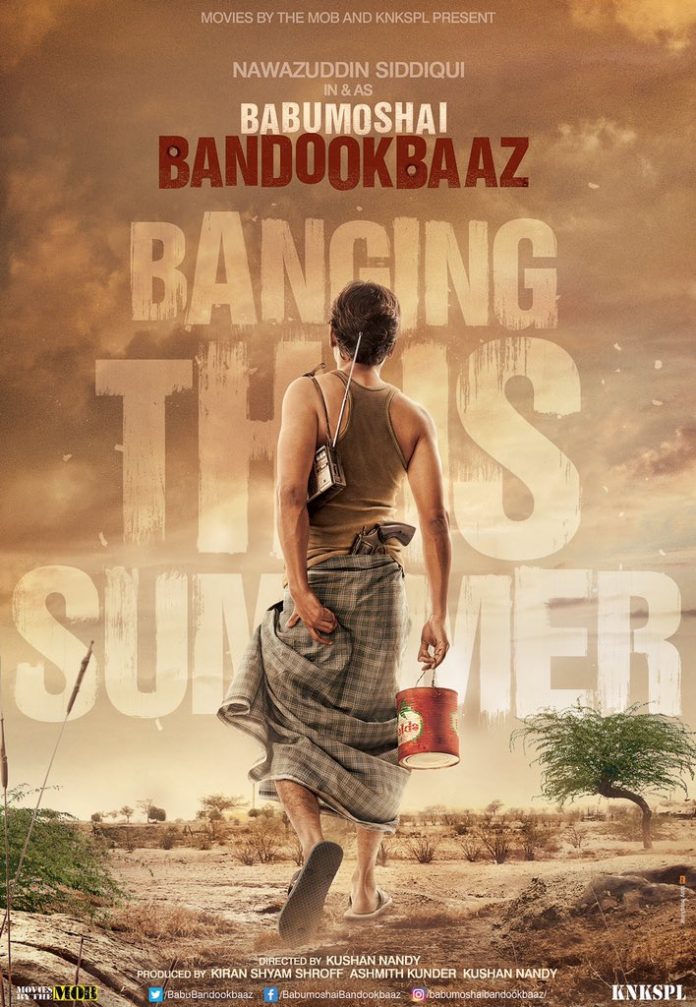 The first Babumoshai Bandookbaaz poster is out and it has a vibe of Gangs of Wasseypur. Directed by Kushan Nandy, Nawazuddin Siddiqui plays the role of a contract killer in the film.

The film’s first poster shows Siddiqui walking into an open field, to answer nature’s call. He is carrying a Dalda can in one hand, a transistor on his shoulder and a shotgun tucked in at the back of his lungi! The movie also stars Tahir Raj Bhasin and Chitrangada Singh.

Last year the film was caught in a controversy when the lead heroine of the film, Chitrangada accused director, Kushan of asking her to do things she was not comfortable with for a scene. In an interview with SpotboyE in June 2016, she said that, “We finished the shot and Kushan said that he didn’t like it. He wanted me to lie on top of Nawaz. Now let me tell you that I was wearing a petticoat for that scene. I turned around to tell Kushan about my predicament. I told him – ‘Ho toh gaya. Kyun kar raha hai aise? Please try to understand that I am wearing a petticoat. But, he was in no mood to listen and we ended up having a big, loud argument. And wait till you hear this! A few minutes later he went and told Nawaz that we had shot the intimate scene very well!! Can you beat that?”

Seems like the movie is set to release this summer as poster read – ‘BANGING THIS SUMMER’. The tentative release date for Babumoshai Bandookbaaz is June 2017.

Nawazuddin Siddiqui’s other projects include Nandita Das’s Manto, Ravi Udyawar’s Mom in which his look his unrecognisable and Munna Michael which stars, Tiger Shroff in a lead role. He will also be seen in Chandamama Door Ke opposite Sushant Singh Rajput.