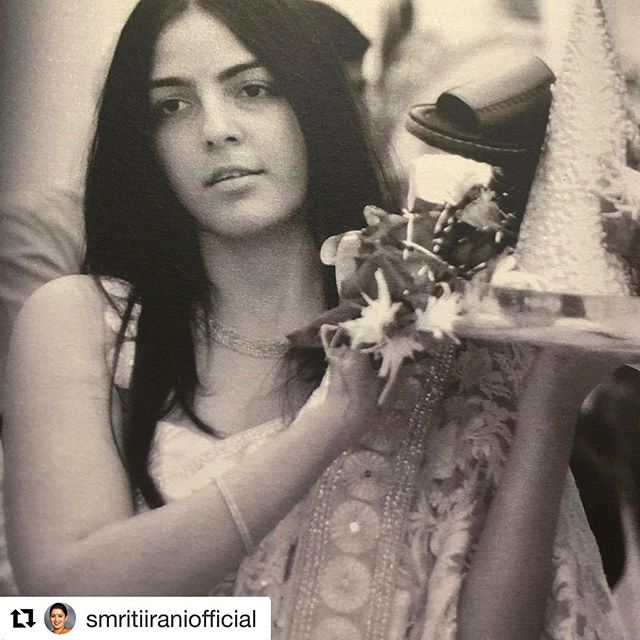 Shah Rukh Khan is busy shooting for the upcoming Imtiaz Ali movie. Despite a busy schedule, the actor makes sure to remember old friends and old memories that he spent at Delhi. The Asoka actor shared a picture which was shared by TV actress turned Union Minister of Textiles Smriti Irani on Instagram. The picture had Smriti’s daughter Shanelle in an Indian outfit.

Smriti captioned the image, “#familyphoto some one is being missed sorely @shanelleirani”. Shah Rukh reposted the image and revealed, “My childhood friend Zubin’s daughter all grown up and so pretty… and just for the record I named her Shanelle…” Later Smriti replied, “#memories #family #friends Best kept secret out, she continues to make us proud”.

The Union Minister of Textiles joined the photo sharing site Instagram a few days back. TV producer EKta Kapoor posted a picture of herself with Smriti and Sakshi Tanwar on her Instagram page and wrote, “Let’s welcome my friend ! A force to recon with ! Her meteoric rise stunned many but what stuns me more is how rooted she is! Finally on instagram let’s welcome tulsi !@smritiiraniofficial!”

My childhood friend Zubin's daughter all grown up and so pretty… and just for the record I named her Shanelle… #Repost @smritiiraniofficial with @repostapp ・・・ #familyphoto some one is being missed sorely ????‍??@shanelleirani