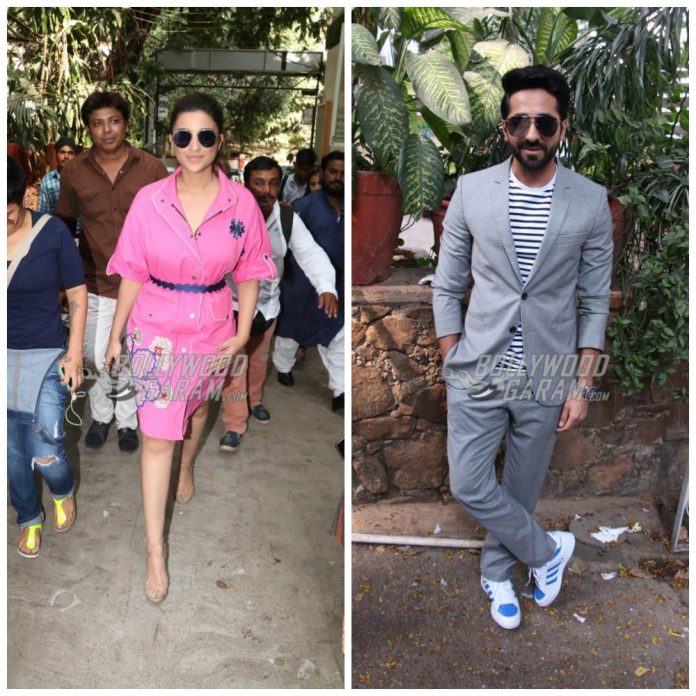 Co-stars Ayushmann Khurrana and Parineeti Chopra made the trendiest appearance at a promotional event for their upcoming movie Meri Pyaari Bindu at the Bandra Cuckoo Club in Mumbai on May 8, 2017. The upcoming Hindi romantic flick will treat the audience with the fresh pair of Parineeti and Ayushmann together, with a number of songs from the upcoming flick.

Parineeti Chopra looked cool in a bright pink dress with flower embellishments, while her on-screen hero Ayushmann Khurrana appeared in a grey suit, striped t-shirt and sneakers. The Ishaqzaade actress is these days working hard on her fitness and has drastically shed weight to look more glamorous than she already is.

Their movie, Meri Pyaari Bindu is ready to hit the theatres on May 12, 2017 and the makers have triggered the promotional events. The actors are not leaving any opportunity to market the film on a number of platforms, so that the movie reaches the maximum audience. Apart from Parineeti Chopra and Ayushmann Khurrana, the movie also stars Aparajita Auddy and Rajatabha Dutta. The film is directed by Akshay Roy and jointly produced by Aditya Chopra and Maneesh Sharma. Meri Pyaari Bindu is a light-hearted film that is perfect to chill with friends during the summer. With just a week to go for the film to release, promotions are in full swing. Parineeti has been promoting the film alone, but her co-star has now joined her to hit the road together.