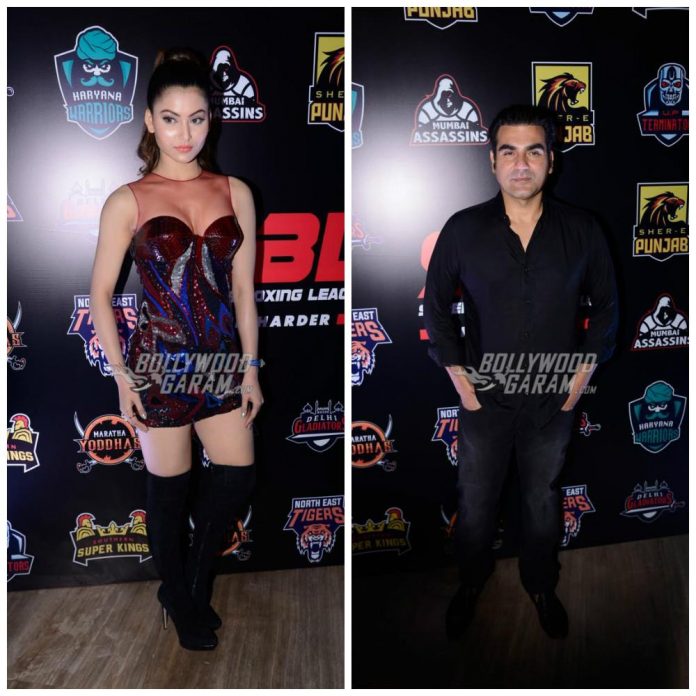 Urvashi Rautela, who sizzled in the song Saara Zamaana from Kaabil, made a glamorous appearance at Super Boxing League 2017 on May 8, 2017. Urvashi wore a glittery outfit with black thigh high boots. The Sanam Re actress completed her look with minimum accessories and minimum make-up. The event was also attended by actor turned filmmaker Arbaaz Khan and international boxing champion Amir Khan.

The three announced the schedule and list of teams competing at the Super Boxing League 2017. The league will have eight teams including – Mumbai Assassins, Delhi Gladiators, Haryana Warriors, Sher-E-Punjab, UP Terminators, North East Tigers, Maratha Yoddhas and Southern Super Kings. The first ever edition of Super Boxing League will be held in New Delhi from July 7 to August 12, 2017.

Talking at the event, international boxer Amir Khan said, “Long-term partnerships work best for both the brand and the team, where they draw from each other’s vigour. SBL is going to be a big leap in the history of boxing and I am confident that it will become one of the most coveted title in boxing in the years to come.”

Each team at Super Boxing League 2017 will have a strength of 12 boxers, including six back up boxers. Each team will have a mix of five male and one female boxer with a maximum of three international boxers.