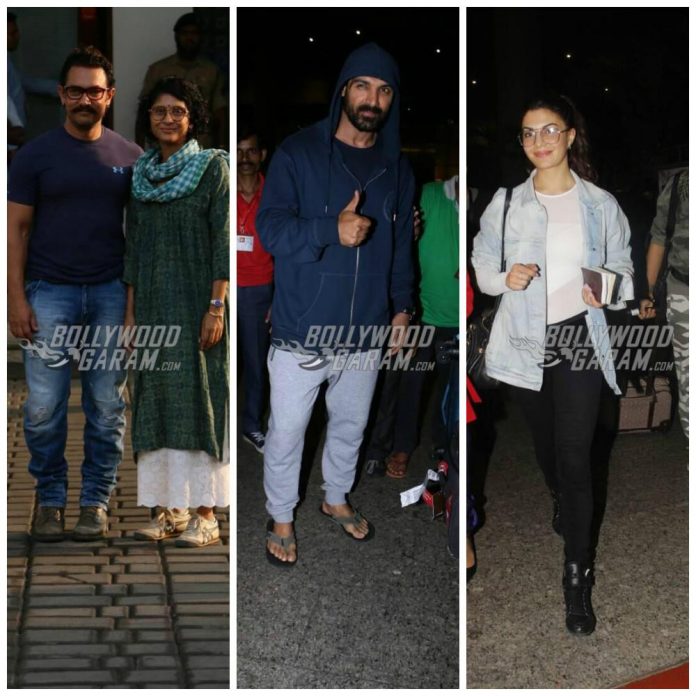 Bollywood celebrities often have to travel to fulfill work commitments. Actors John Abraham, Jacqueline Fernandez, Aamir Khan and Kiran Rao were seen at Mumbai airport as they kept up their work commitments and travel schedules. All four sported stunning chic summer airport fashion and we are completely in love with their looks!

Jacqueline Fernandez carried a trendy look at the airport with a white body suit paired with a navy blue trouser and denim jacket.

John Abraham opted for a comfortable look with an over-sized hoodie and matching track pants. Though the handsome hunk looked fatigued, he was still happy to pose for the paps. On the work from John will soon be seen in the upcoming movie based on the Pokhran tests and will be sharing the screen space with actress Diana Penty. The actor has more work in future as he has been approached for the Indian version of The Expendables and there are reports that the actor might have to step in to the shoes of Sylvester Stallone.

The news was confirmed by John saying, “Yes, I’ve been approached for the film, I’m happy and honoured. I’ve always admitted that I am a Stallone fan. Every time I watch one of his films, I hope for an Indianised version, and The Expendables can definitely lend itself to a desi avatar because it’s a truly entertaining and commercial film which has done better business outside of North America.”

Lastly, we also spotted Aamir Khan and Kiran Rao, who landed back in Mumbai after an extensive tour of the interiors of Maharashtra. This was a work trip for the couple and is reportedly related to Satyamev Jayate’s water cup project. Talking about their airport fashion – Aamir carried a cool look with ripped jeans and a t-shirt while Kiran was seen in a loose kurta paired with white palazzos and a chic checked stole, wrapped around her neck.