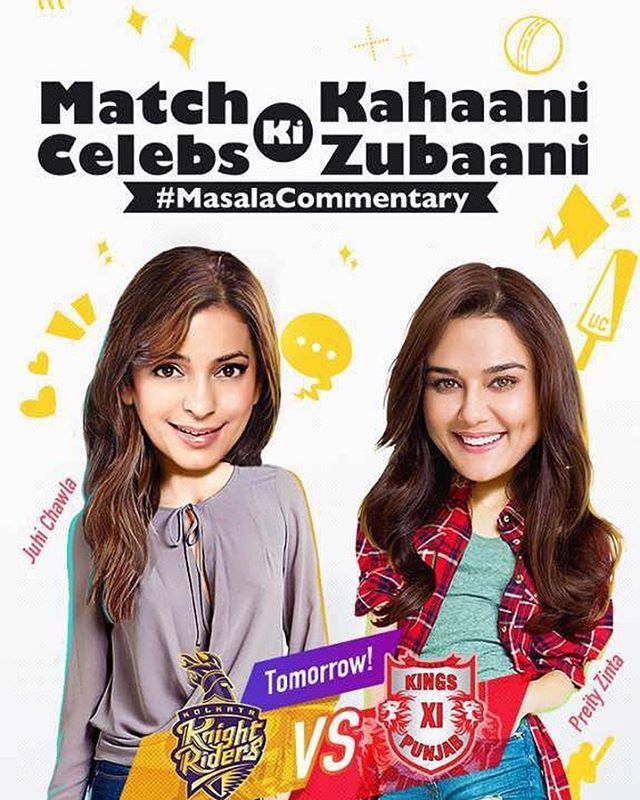 The beauty queens of Bollywood, Juhi Chawla and Preity Zinta took to the commentary box of Kolkata Knight Riders Vs Kings XI Punjab’s Indian Premier League match. It was scheduled on May 9, 2017 at Mohali, Punjab. The two dynamic ladies of Bollywood sportingly took questions from their fans regarding the match as well as their personal lives.

UC announced on Twitter by sharing a photo and captioned it, “The Bollywood beauties @iam_juhi & @realpreityzinta are going LIVE on UC News for #MasalaCommentary today Catch them http://bit.ly/PJLIVE”

Seems like the duo had lots of fun amidst all the commentary business. Preity Zinta has done the commentary role earlier alongside Saif Ali Khan but it was Juhi Chawla’s first time. Excited Juhi posted a tweet to share the news with her fans.

On the work front, Preity Zinta was last seen in a cameo in the film, Happy Ending, which released in November 2014. Then she got married to Gene in 2016. Now, she has already started working on her comeback film after marriage. Preity is now shooting for Neeraj Pathak’s action-comedy film, Bhaiyyaji Superhitt. It also stars Sunny Deol, Ameesha Patel, Evelyn Sharma, Arshad Warsi, Shreyas Talpade and Manoj Joshi.

Whereas, Juhi Chawla’s last film was Chalk and Duster, which was released in January 2016. Her next upcoming is The Test Case, a hindi web series, directed by Nagesh Kukunoor. The Test Case also stars Nimrat Kaur, Atul Kulkarni, Rahul Dev and Bhuvan Arora.