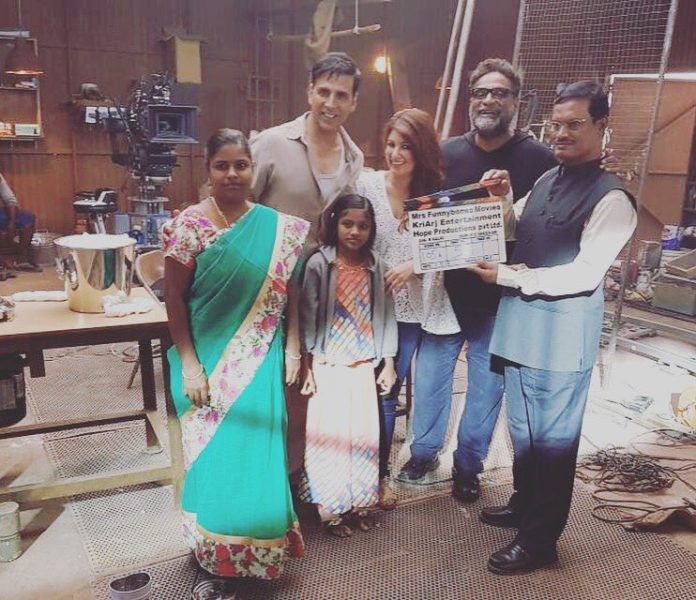 Small time entrepreneur and sanitary napkin revolutionary, Arunachalam Muruganantham is no more a common man. Akshay Kumar, who is currently shooting for the upcoming flick PadMan, met the real man behind the story. Upcoming flick PadMan is a story about Muruganantham, who became popular for making economic sanitary pads for women who could not afford expensive sanitary pads which are important for menstrual hygiene. Producer Twinkle Khanna shared a picture on her Twitter account where Akshay and Twinkle are seen posing with Arunachalam and his family.

The picture had the caption, “On the set today with the real and reel life Padman and our brilliant director Balki #Padman #MrsFunnybonesMovies” PadMan will mark Twinkle’s debut as a producer. The picture also saw filmmaker R. Balki and Arunachalam holding a clapper.

The upcoming film also stars Sonam Kapoor and Radhika Apte. Sonam will be seen playing the role of a tabla player. The actress has been learning how to play the instrument ever since she signed PadMan. Reports suggest that superstar Amitabh Bachchan will also be playing an important role in the film, but no official confirmation has been made yet. Muruganantham’s story had become popular on the social media after which Akshay announced that he would make a biopic on him.

On the set today with the real and reel life Padman and our brilliant director Balki #Padman #MrsFunnybonesMovies pic.twitter.com/w4nEmsz8fu