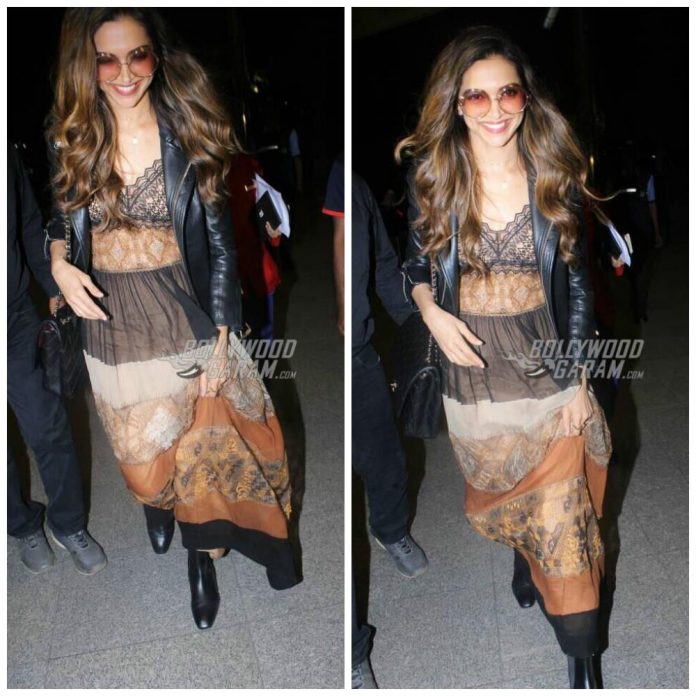 Bollywood actress Deepika Padukone is all excited to make her debut at Cannes International Film Festival 2017. The was seen at the airport as she left for the film festival at Cannes on May 14, 2017. Deepika looked all excited and happy as she began her journey and looked fiercely bad-ass in a Alberta Ferretti maxi dress paired with a Maje Officiel leather jacket and Loubouttins boots.

The Bajirao Mastani actress will be seen joining Cannes veterans Sonam Kapoor and Aishwarya Rai for the 70th Cannes International Film Festival. Deepika in a recent interview expressed, “I cannot believe this is happening. It is every girl’s dream. I think I am looking forward to all of it. Have been to Cannes before. There’s something about the place. There is a lot of positivity there. Watching some exciting films.”

Sonam, Aishwarya and Deepika will be joining Hollywood celebrities Eva Longoria and Julianne Moore, who also represent L’Oreal Paris as international brand ambassadors. Deepika is expected to walk the red carpet on May 17 and May 18. The leggy lass, while talking about her appearance at Cannes said that she has already started planning and is focusing more on her clothes. Padukone added that there is much more than clothes and that her team is working hard on that.

Take a look at the gorgeous Deepika Padukone at Mumbai airport –