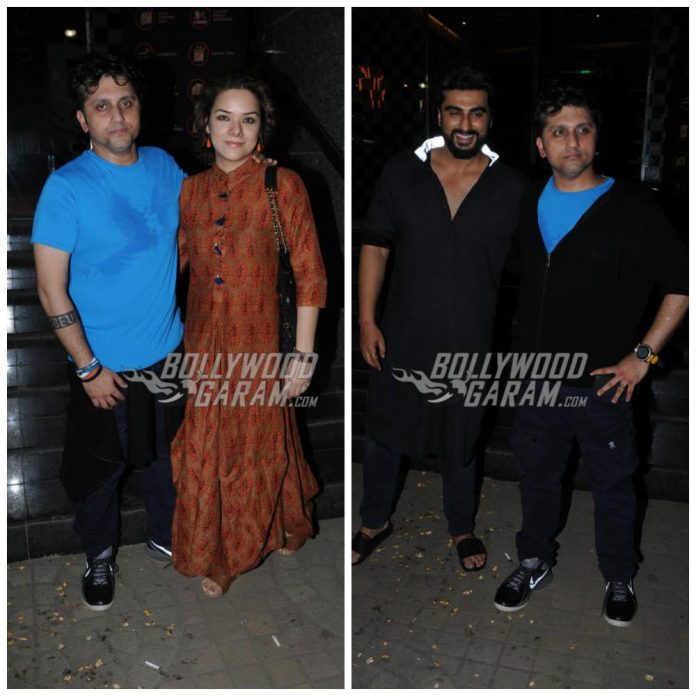 Cast and crew of Half Girlfriend attend a special screening of the movie, while Shraddha Kapoor remains conspicuous by her absence

Bollywood hunk Arjun Kapoor, along with director Mohit Suri attended the special screening of their upcoming film Half Girlfriend in Mumbai on May 15, 2017. The screening event also saw the presence of Mohit’s wife, former model and actress, Udita Goswami.

Arjun Kapoor appeared in a casual black kurta and denim,s while Mohit Suri was seen in casual cargo pants, a t-shirt and jacket. And it also seemed like he couldn’t handle the blazing heat of Mumbai’s summer, and was perspiring during the photo-op with the paparazzi! Former actress Udita Goswami was seen in a long orange and brown outfit, accompanying her husband. With just a few days left for the release of the film, the makers have pumped up the promotions for the romantic flick. The movie also stars Shraddha Kapoor and Vikrant Massey.

The film is based on Indian author Chetan Bhagat’s book Half Girlfriend and the author is also producing the film. The story of the film is set at the backdrop of rural Bihar, New Delhi, Patna and New York and is about a small town boy trying to win the heart of a Delhi based girl. Half Girlfriend was Chetan Bhagat’s sixth book which was released on October 1, 2014 and the Bollywood adaptation with the same name is ready to be released in theatres on May 19, 2017.