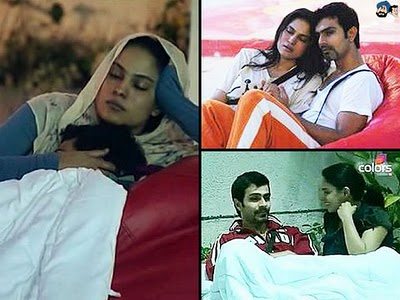 Bigg Boss 4: Pakistani actress Veena Malik is now under the spot light in the house of Bigg Boss 4. Her recent performance on the dining table had irritated Bollywood actor Ashmit Patel.

Ashmit commented that Veena has no respect for food. However the other house mates did not see the item dance she did. Later Veena has also pretended to say sorry to the vegetables that were kept on the table.

The Pakistani actress was also seen bitching about TV actress Shweta Tiwari. She said that, Shweta tends to back stab with sophistication. However the audience is well aware that, which inmate of the house tends to back stab more on the show.

Apparently, actress Dolly Bindra is also upset with Veena’s behavior in the house. Recently many times when Dolly tried to get in to an argument with Veena, Ashmit used to interfere and sort out the matter between the two. One has to now wait and watch, what more can Veena do to grab attention in the house of Bigg Boss 4.