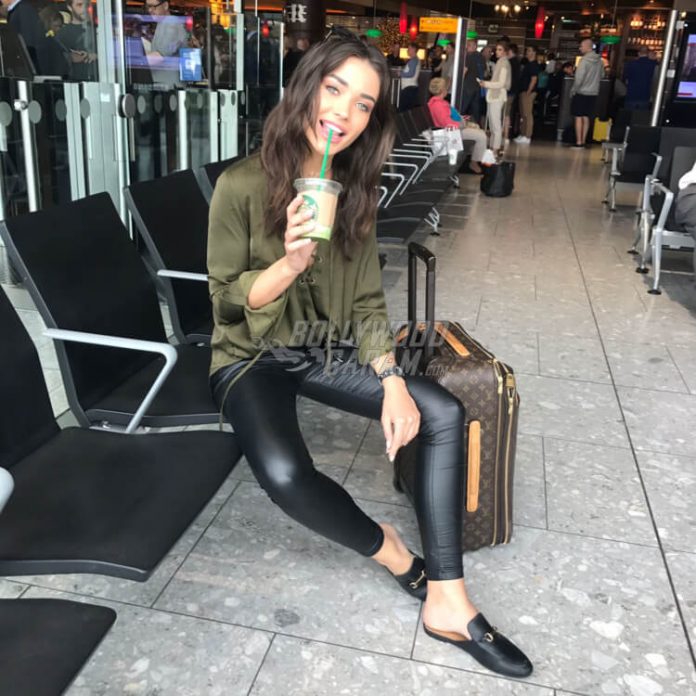 In case you believed that it was only Aishwarya, Sonam and Deepika attending the 70th Cannes International Film Festival, you’re wrong! A host of Bollywood celebrities are attending Cannes 2017 and Amy Jackson is one of them. She was spotted at London airport today, sipping a Starbucks smoothie with her suitcase by her side as she waited to board her flight to Cannes. We are completely in love with Amy’s airport look as she sported slick leather body hugging pants and a lose fit olive green top.

Amy debuted at Cannes in 2016 as she attended a luncheon hosted by the British Film Institute and a separate gala for raising funds for Syrian refugees. This year, the British model turned Bollywood actress will be at Cannes alongside Aishwarya Rai Bachchan on May 19, 2017. She will be attending the luncheon hosted by British Film Institute this year too.

Reportedly, Amy has left no stone unturned for her Cannes 2017 preparations and hired Chelsea FC trainer Bradley Simmons to get her red carpet ready! Talking to Midday about her preparations for Cannes 2017, Amy said, “It’s great to train with Bradley. He is the go-to celebrity trainer in the UK.  I had never challenged my fitness levels like I do now. I look forward to Cannes and am glad that I have someone like him to help me look my best.”

She also plans to take pizza making lessons while at Cannes and has even taken an entire day off from her Cannes 2017 schedule to accommodate Pizza cooking. “Cannes is probably the most beautiful city I’ve been to, and I love the pizzas there. I will take a day off just to walk around, learn how to cook, and appreciate all the beauty.”

We are eagerly looking forward to Amy Jackson at the Cannes Film festival 2017 red carpet on May 19! Until then, here’s a picture of Amy looking stunning as ever in a Falguni and Shane Peacock creation at Cannes Film Festival 2016 –