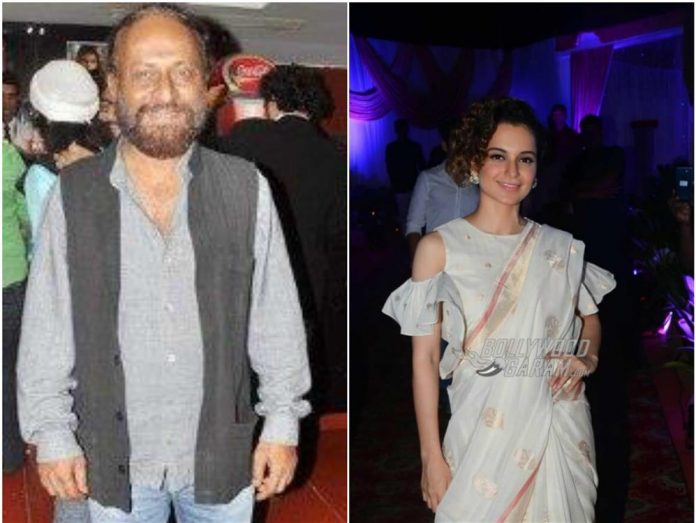 Maverick filmmaker Ketan Mehta has sent a legal notice to actress Kangana Ranaut, accusing her of “hijacking” his most ambitious project to date. He says that Kangana and producer Kamal Jain have worked together against his decade long labour of love, Rani of Jhansi – The Warrior Queen. His story was the recreation of the fierce Rani Laxmibhai of Jhansi, who led the first rebel war for independence against the British in 1857.

Back in 2015, Ketan Mehta had approached Kangana Ranaut to play the titular role in his film. She immediately agreed, and even publicly began to talk about the film to the media and in numerous interviews she was doing at the time. While Kangana was working on clearing her schedule and working on dates to start shooting for the film, Mehta was working on the script, doing more research and brought an international producer on board.

However, he was in shock when he got to know from the media that Kangana Ranaut had begun working on Manikarnika – The Queen of Jhansi with producer Kamal Jain and his team. Manikarnika covers the same life story of Rani Laxmibhai that Kangana was supposed to work on with Ketan Mehta. She was well aware of his script, the storyline, the research done and had now taken all that information to work with a different camp.

A source close to Ketan Mehta told a leading daily, “This is a brazen act of hijacking a film project. This subject has been Ketan’s labour of love for over ten years and he believes that Rani of Jhansi is a great subject which can travel across the world. I know he has worked very hard to develop the entire project and has invested lots of time, energy and money in it. The act is a criminal breach of trust and a completely unethical attempt at stealing someone’s fully developed film project.”

Ketan Mehta is already familiar with historical subjects, and has worked on a number of magnum opuses in the past. A few of his films include Sardar, Mangal Pandey – The Rising, Maya Memsaab and most recently, Manjhi – The Mountain Man. He has also worked with a number of acting forces including Naseeruddin Shah, Smita Patil, Om Puri and Aamir Khan, among others. He was also the Chairman of the committee responsible for selecting an Indian film for the Oscars last year. According to the source, this is the worst experience that he has gone through in his decades-long career.