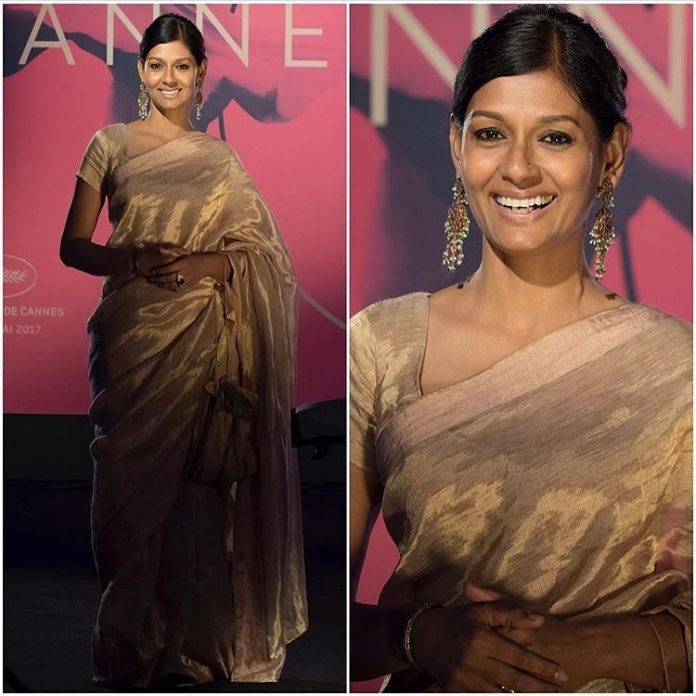 Actress turned Director, Nandita Das made heads turn at the Cannes Film Festival 2017 red carpet on Day 2, May 18 as she walked in a gorgeous Anavila zari sari, completing her look with ethnic danglers. She was at the coveted film festival to present a promo of her work-in-progress biopic, Manto.

Manto is based on the life and works of famous Hindi writer Saadat Hassan Manto the movie stars Nawazuddin Siddiqui in the lead role as Manto! The lead actor accompanied Nandita Das to the 70th International Cannes Film Festival as the two unveiled a small sneak peak into the biopic.

Nandita Das is a regular at Cannes and has previously been a jury member at Cannes. Talking about Manto at Cannes she said, “It’s more of a curtain raiser. We’re taking a small break from our shoot to go to Cannes because I believe it’s a great platform.”

Nandita and Nawazuddin Siddiqui even unveiled a 6 minutes long look into the film, titled In Defence of Freedom. The film revolves around Manto’s strong belief with regards to freedom of speech and expression. Talking about the short film created specially for Cannes 2017 she said, “We’ll be sharing the film, of course, for the sales agents and buyers, but have something special for film goers and lovers at the festival.”

Before leaving for Cannes 2017, an excited Nawazuddin Siddiqui spoke about his first time at Cannes with PTI and was quoted saying,“It’s a great festival and some of the world’s best movies are screened there every year. It’s special every time. Every actor, big or small, is respected there, it is an experience that every actor needs to be a part of at least once in their lives.”

However, this is not the first time Nawazuddin is attending Cannes. He attended the international film festival in 2013 too when four of his films were being showcased at Cannes! This included, Monsoon Shootout, Bombay Talkies, Lunch Box and Raman Raghav 2.0. Also, this year was special for him as he celebrated his 43rd birthday eve presenting Manto!

"In Defence of Freedom"

Nawazuddin Siddiqui and Nandita Dass together in a Short Film "In Defence of Freedom" …. Manto is Alive