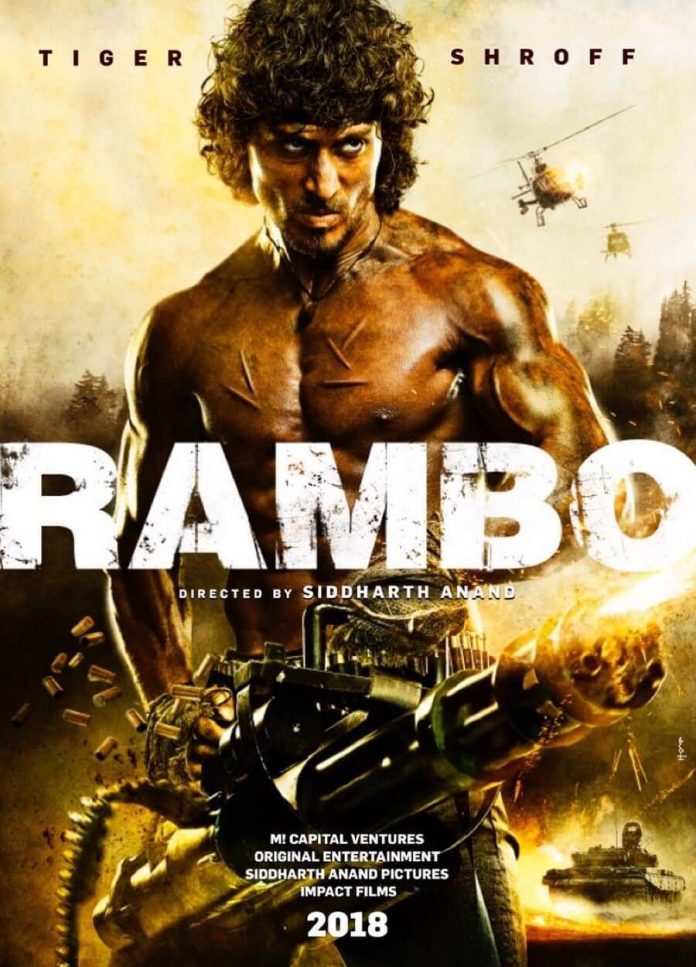 The first poster of Tiger Shroff starrer Rambo unveiled on May 20, 2017. It is an official remake of Sylvester Stallone’s hit action movie by the same name. The Baaghi actor is playing the iconic action character in the film.

The poster shows a rugged and tough-looking Tiger Shroff in the backdrop of a war zone. Tiger also posted the picture on Twitter and Instagram and wrote,“Grew up on this character, humbled and blessed to step into his shoes years later. #RamboRemake.”

Hollywood star, Stallone reacted to the Indian remake of his film Rambo and wrote on social media, “I read recently they are remaking Rambo in India !! Great character.. hope they don’t wreck it .”

Tiger replied to Stallone saying that, “Humbled and blessed to be walking the road you lay down. You are irreplaceable and I hope I don’t let you down sir @TheSlyStallone #RamboRemake”

Tiger also said, “Being a martial artist and a huge action movie buff since childhood, this all seems very surreal, and I’m very grateful for this opportunity. By no means do I believe I can replace the legendary Sylvester Stallone; however, I do feel that somehow this is something I’ve been preparing for since childhood.”

Siddharth Anand, the director of the film shared, “Rambo is one of the most iconic action blockbuster films from my generation. I grew up looking up to heroes such as Stallone, and in a time where the Indian industry is lacking action characters of Rambo’s caliber, this is a perfect time to introduce Tiger in this role. I cannot wait to work with Tiger on this film. He has that aura about him, a power and vulnerability that will make him the next iconic action hero of our time.”

The Indian remake of Rambo will follow the last surviving member of an elite covert unit of the Indian Armed Forces who returns home to discover a war waging in his own land. In the dangerous jungles and mountains of Himalayas, he unleashes destruction, becoming the unstoppable machine he was trained to be.

Rambo will be produced by M! Capital Ventures, Original Entertainment, Impact Films and Siddharth Anand Pictures. The film is scheduled to start shooting in February 2018, with a release targeted for late 2018. Watch this space for more updates on Rambo!

‪Grew up on this character, humbled and blessed to step into his shoes years later. #RamboRemake #greatestactionheroofalltime #legend #irreplacable‬ #rambo

I read recently they are remaking Rambo in India !! .. Great character.. hope they don't wreck it .

I actually get excited in my heart whenever young artists get an rare opportunity to reach for the stars! Eye of the Tiger! I am sure you will put all of your heart and soul into it…Never give up young man !

Because you were there, we sort of exist, We are all just derivatives of you sir! There will always and only be ONE "eye of the tiger" for us cubs ? you rule the jungle! Thank you so much sir! #RAMBO #RamboRemake Repost @officialslystallone: I actually get excited in my heart whenever young artists get an rare opportunity to reach for the stars! Eye of the Tiger! I am sure he will put his heart and soul into it…