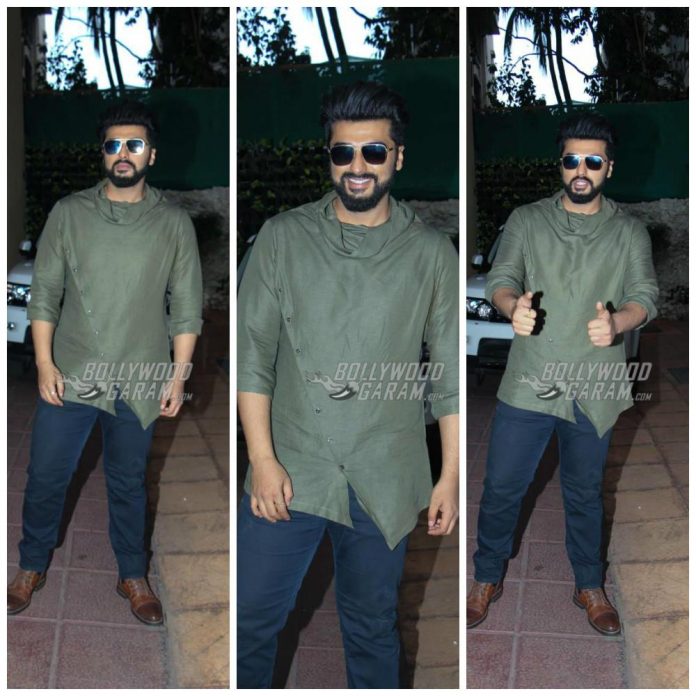 Arjun Kapoor poses for the shutterbugs as he exited Half Girlfriend producer, Ekta Kapoor’s residence in Mumbai

Half Girlfriend has been released in theatres and is doing a reasonably good business at the box office despite mixed reviews from the audience and critics. Arjun Kapoor and Shraddha Kapoor have worked hard in terms of promotions by touching various platforms. The actor was seen making a brief visit to producer Ekta Kapoor’s house in Mumbai on May 22, 2017.

Now that the promotions of Half Girlfriend have concluded, Arjun will soon begin promotions of Mubarakan. Arjun during his visit to Ekta Kapoor’s house looked stylish in a green asymmetric shirt and blue chinos. The actor is now looking forward to the release of Mubarakan, which also stars Anil Kapoor, Ileana D’Cruz and Athiya Shetty. The first poster of the movie is out and show Arjun Kapoor doing a double role in the flick!

Anil Kapoor, in the film will be seen playing the role of a man from the Sikh community. The veteran star shared the first look on his official Twitter account and captioned, “Don’t go by our innocent faces! The Chacha – Bhatija(s) are up to no good! Wait for #28thJuly to know the full story! @arjunk26 #Mubarakan.” The movie is directed by Anees Bazme and produced under the banner of Sony Pictures Networks Productions.

These photos of the dashing Arjun Kapoor will make your heart skip a beat!