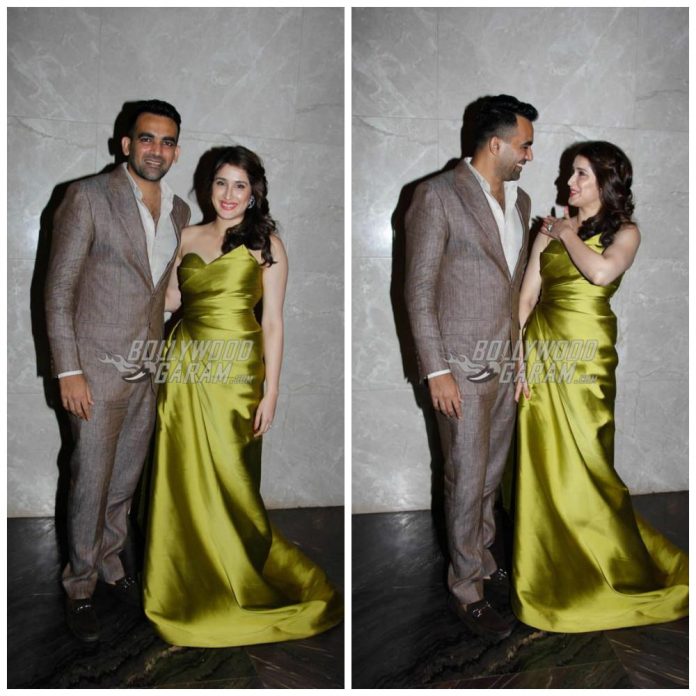 After a romantic proposal, Cricketer Zaheer Khan got engaged to Sagarika Ghatge in a grand ceremony held in Mumbai

Indian cricketer Zaheer Khan had announced his engagement with actress Sagarika Ghatge recently on social media. The couple this time got engaged at a special ceremony held in Mumbai on May 23, 2017. Sagarika looked stunning in a satin green gown while the Indian cricketer looked dapper in a formal suit.

The Chak De! India actress had earlier revealed about the proposal by Zaheer and said, “It was a surprise for me too as it came right in the middle of the IPL season. We wanted to get away from the city as we had two days off in between matches. So he flew me to Goa for a day and that’s how the engagement happened.” The to-be bride and groom looked happy as they posed for the cameras. The engagement ceremony saw the attendance of close friends from the industry including Vidya Malvade, Atul Kasbekar, Mandira Bedi, Ajay Jadeja, Ashish Nehra, Sachi Tendulkar and Anjali Tendulkar, Bobby Deol, Arshad Warsi, Maria Goretti, Prachi Desai, Yuvraj Singh, Raveena Tandon, Manasi Scott, Anushka Sharma and Virat Kohli, who walked in hand-in-hand.

When asked about the wedding date, Sagarika said that they are waiting for the IPL to get over after which they would decided on a date. The actress added that at present they do not want to get stressed as Zaheer has to focus on the matches. Rumours of a relationship between Zaheer and Sagarika were doing the rounds for quite some time after which the Indian cricketer came up with the surprise Tweet and wrote, “Never laugh at your wife’s choices. You are one of them !!! Partners for life. #engaged @sagarikavghatge.” The 38 year old cricketer had posted a picture of the two with a huge rock on Sagarika’s finger.

Now that the IPL has concluded the announcements of the big day are soon expected to be made.