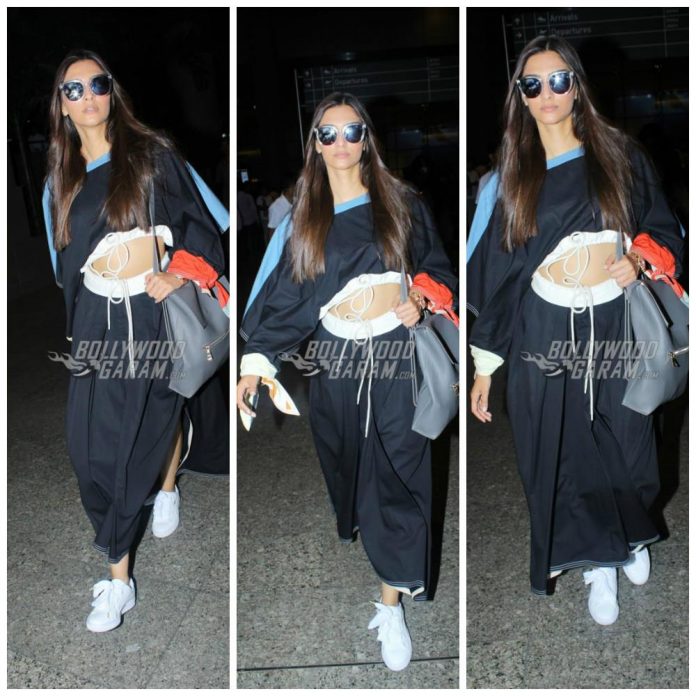 Bollywood diva Sonam made a dazzling appearance at the Cannes Film festival 2017 red carpet on May 21 and May 22. The actress made a stylish exit from Mumbai Airport as she returned from her two day long trip to Cannes 2017 as a L’Oreal Paris brand ambassador.

While a Cannes 2017, Sonam donned several outfits by House of Masaba, Elli Saab, Abu Jani Sandeep Khosla and Anamika Khanna. The actress, in an earlier interview said that she was not worried about the fashion critics as her choices are often not criticized. Sonam proved that right as she made heads turn with her gorgeous looks at the Cannes Film festival 2017 red carpet and press interactions during the day.

See all of Sonam Kapoor’s looks at Cannes Film Festival 2017!

The sexy actress was seen in a navy blue 2 piece outfit at Mumbai airport and was accompanied by sister Rhea Kapoor. Being the fashionista that she is, Sonam along with Rhea has recently launched her own high street fashion label, RHESON. On the work front, Sonam will soon begin shoot for Veere Di Wedding which is also being produced by Rhea Kapoor and stars Kareena Kapoor and Swara Bhaskar.