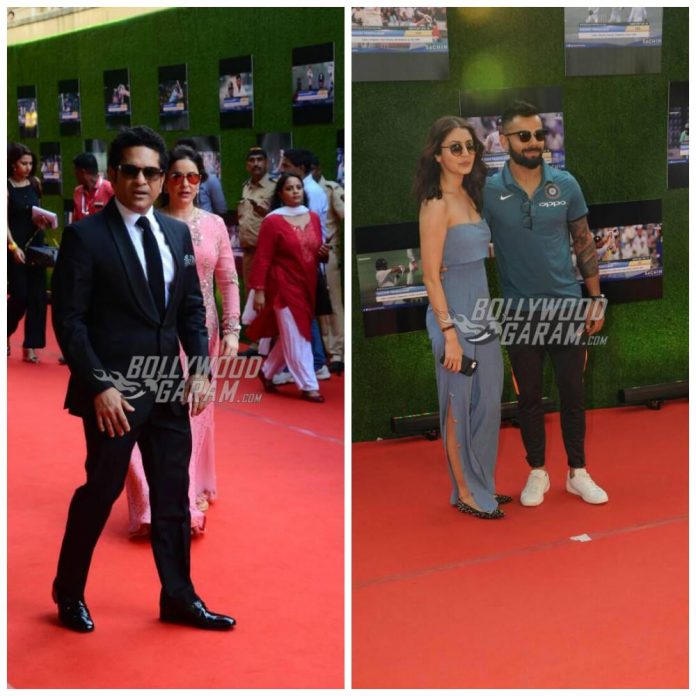 Bollywood celebrities and members of the Indian cricket team join Sachin Tendulkar for the premiere of Sachin: A Billion Dreams

B’towners and celebrities from the world of cricket decked up and flocked for the grand premier of the upcoming biographical film Sachin: A Billion Dreams in Mumbai on May 24, 2017. The grand premiere saw the true star of the film – Sachin Tendulkar, along with wife Anjali Tendulkar, Anushka Sharma with beau Virat Kohli, Mahendra Singh Dhoni and the entire Indian cricket team.

Sachin looked dapper in a black suit while wife Anjali looked pretty in a pink outfit. Actress Anushka looked gorgeous in an off-shoulder jumpsuit while Virat was seen in a grey t-shirt and black track pants. The entire Indian cricket team turned up in their cricketing colours and posed with the Master Blaster. Sachin and wife Anjali were also seen posing with Anushka and Virat, who walked in hand in hand.

Sachin: A Billion Dreams is all about the life and journey of Sachin as a person and as a player. The biographical flick has been made after watching and researching on about ten thousand hours of footage of Sachin’s life on and off the field. The film is written and directed by James Erskine and produced by Ravi Bhagchandka and Carnival Motion Pictures under the banner 200 NotOut Productions. Sachin’s biographical flick has minutest details about his personal life and also certain aspects that have never been seen or known before.

The film was shot in Hindi, Marathi and English simultaneously and dubbed in Tamil and Telugu languages. So far the movie has been declared as tax free in the states Kerela, Chattisgarh and Odisha. Sachin: A Billion Dreams will be released in theatres on May 26, 2017.