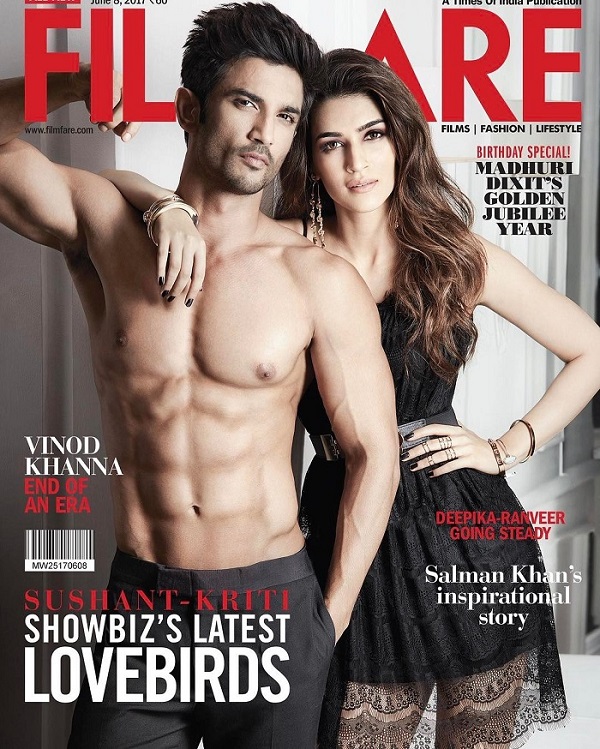 Alleged love birds, Sushant Singh Rajput and Kriti Sanon have teamed up to charm the cover of Filmfare Magazine’s June 2017 issue. The photos have already taken social media by storm and fans can’t wait to get more of the two in Raabta. While we simply can’t get over Sushant Singh Rajput’s six pack abs! Here’s a breakdown of all the fashion sported by the gorgeous couple –

#1 The cover of the magazine features Kriti in a stunning black outfit. The actress completes her look with long earrings, nude lip shades, and open hair. Whereas, Sushant looks dashing flaunting his abs and ripped body.

#2 In another snap, the couple hit an intimate pose, where Kriti wore a lacy black outfit. Whereas, Sushant went for a casual white shirt and blue pants along with a black-white striped tie. Kriti is seen pulling the tie and throwing up an intimate pose of the couple.

#3 Sushant Singh Rajput’s solo pictures from the shoot are just too much to handle! The actor wore a formal black shirt and gray pants. He added sexy black shades to his cool look.

#4 In Kriti’s personal photoshoot, she is seen wearing a black net attire. She poses as she lies down and gives her sassy look for the cameras.

#5 In another solo photo Kriti is seen wearing a black blouse and black bottoms. She is posing against the wall.

On the work front, Sushant-Kriti starrer Raabta is slated to release on June 9, 2017. Sushant will also be seen in Tarun Mansukhani’s Drive. The film stars Jacqueline Fernandes opposite Sushant. Whereas, Kriti will be sharing the silver screen with Ayushmaan Khurrana and Rajkumar Rao in Ashwiny Iyer Tiwari’s romantic comedy, Bareilly Ki Barfi.

Here’s a glimpse of Sushant and Kriti’s hot photoshoot –

Are they the hottest pair on the block or what! #SushantSinghRajput and #KritiSanon steam it up for their exclusive cover shoot for #Filmfare.

Watch this space for hot updated on Sushant and Kriti exclusively on Bollywood Garam!