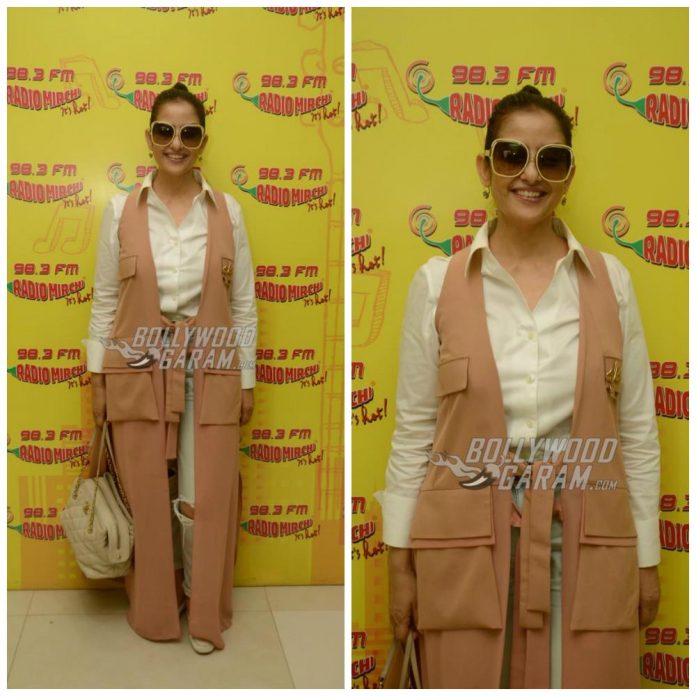 Manisha Koirala is on a promotional spree for Dear Maya

Actress Manisha Koirala is back to work and is busy promoting her upcoming film Dear Maya. The actress was seen at Radio Mirchi Studios in Mumbai on May 29, 2017. Manisha looked fresh and glowing in a white outfit paired with a long brown shrug.

The Dil Se actress will be seen playing the role of Mayadevi, who is a lonely middle-aged woman from Shimla. Manisha during her visit to the studio, interacted with the listeners and posed for the cameras. The story of Dear Maya, is about two girls who prank Mayadevi by writing a series of letters by a fictitious name but the mischief takes a different turn when the woman goes missing.

The film is written and directed by Sunaina Bhatnagar and also stars Madiha Imam and Shreya Chaudhary. This Manisha Koirala starrer, is produced by Sandeep Leyzell and releases on June 2, 2017. Apart from Dear Maya, the actress will also be seen in the upcoming Sanjay Dutt biopic. Reports suggest that Manisha will be seen playing the role of Sanjay Dutt’s mother Nargis. However, no official confirmation has been made as makers are keeping every little detail under wraps.

Treat yourself to latest photos of this beautiful actress, Manisha Koirala –