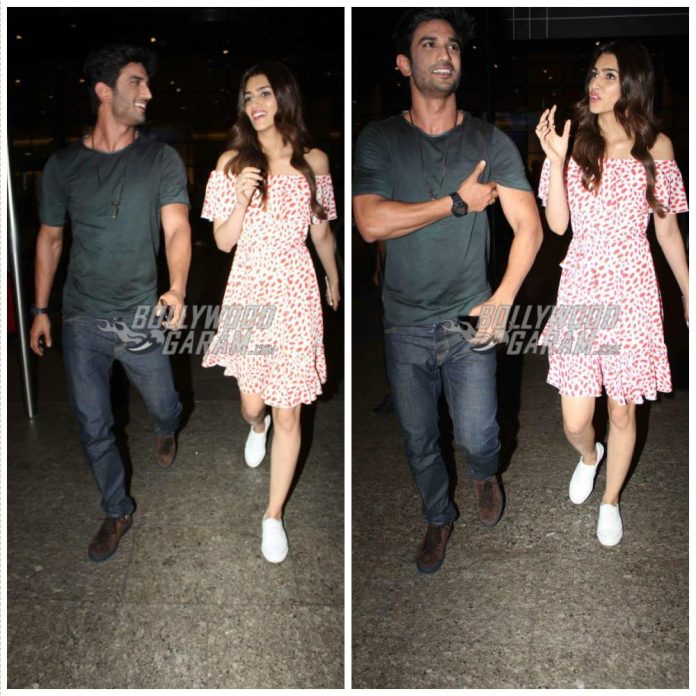 Sushant Singh Rajput and Kriti Sanon, who are busy promoting Raabta, were snapped in a casual conversation at the airport

Sushant Singh Rajput and Kriti Sanon have never failed to show off their bond every time they have been snapped on a public appearance. The actors were once again caught sharing a great bond as they made their way at the airport on June 2, 2017.

Kriti was seen in an off-shoulder summery dress while Sushant was seen in a casual t-shirt and denims. At the airport, the actors were seen chatting away as they were snapped on their travel schedule. Sushant and Kriti are travelling different places to promote their film Raabta, which is due to release in theatres on June 9, 2017.

The film also stars Jim Sarbh, who played the role of a terrorist in the biopic Neerja, Rajkumar Rao and Varun Sharma, who has been seen playing a lot of comic roles in various movies. Raabta is the first directorial venture of Dinesh Vijan. The trailer has already become popular and left the audience eager for the release. Not just that the recent song releases, Main tera Boyfriend, Ik Vaari Aa, Lambiyaan Si Judaayian, Raabta title track and Sadda Move have also garnered a lot of the audience’s attention!

We surely know that this movie will be a box office hit. Take a look at the photos of this rumoured couple leaving the airport –