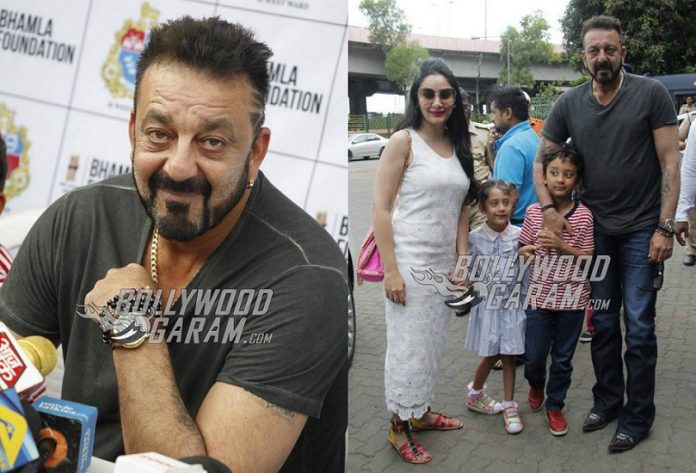 Actor Sanjay Dutt set an example as he planted a tree at a tree plantation drive held in Mumbai on June 2, 2017. The Munna Bhai MBBS actor not just planted a tree, but also helped spread awareness about the importance of planting trees. Dutt was snapped with his wife Manyata and children, twins Shahraan and Iqra.

The Vaastav actor looked dapper in a grey t-shirt and a pair of blue denims, while wife Manyata appeared in a white summer dress. Kids Shahraan and Iqra, too, grabbed attention as they looked cute in  their casuals. It was good to see Sanjay being a part of a social cause and set a good example in front of his children. His little ones also kept up with their father in helping wherever they could.

The actor had earlier backed out from the film Total Dhamaal from the Dhamaal franchise. Reports said that the actor did not want to be a part of the film that had adult comedy as he did not want his children to see their father cracking adult jokes.

Looks like Sanjay Dutt has seriously turned over a new leaf, both figuratively and with environmental causes!

All done and said, now take a look at this veteran actor planting his seeds of love for nature –