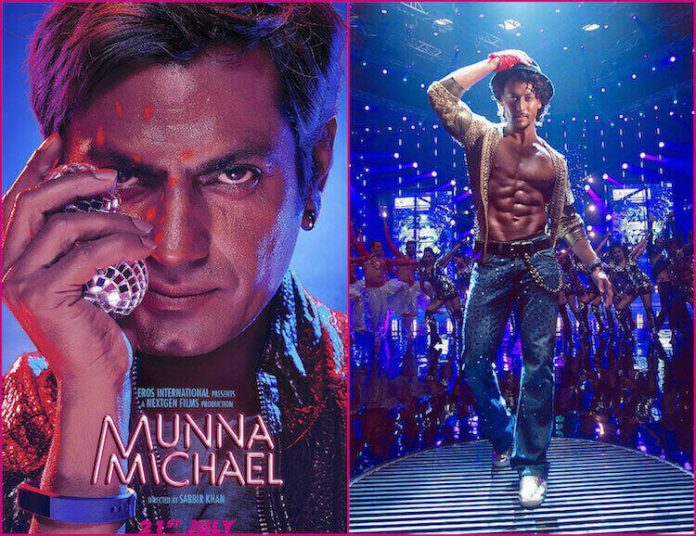 As fans eagerly await the release of Tiger Shroff’s next film, Munna Michael’s trailer, we just can’t get over his latest look from the movie! Tiger Shroff shared a poster from the film flaunting his ravishing 8 pack abs as he strikes a Michael Jackson pose.

Munna Michael tells the story of a street kid, Munna who loves dancing and grows up idolizing the King of pop, Michael Jackson. He overcomes various conflicts and difficulties to fulfill his dreams to become a dancing diva.

Interestingly, it has been reported that Nawazuddin Siddiqui, who plays the role of a villain in the film will also be putting on his dancing shoes to match up Tiger Shroff’s moves! These reports have been confirmed by Nawazuddin Siddiqui’s latest Instagram post in which he shared a character poster from Munna Michael and captioned it, ‘Ab Delhi ka Don bhi dance karega!’ Previously, he shared a look from the shoot of the film, which shows him in a completely different avatar from his usual on-screen characters. Now this will definitely be interesting to watch and hopefully the official trailer sheds more light on Nawaz’s character.

Munna Michael is a special film for lead actor Tiger Shroff as it’s a dance based film and pays a tribute to his idol, Michael Jackson. The film also marks his third movie with mentor and director Shabbir Khan, after Heropanti and Baaghi. Lastly, the bandana sported by Tiger throughout the film is said to be a precious gift from father Jackie Shroff.

So overall, seems like Munna Michael is going to be an dance – action packed entertainer with a punch of powerful acting thrown in by Nawazuddin Siddiqui. Stay tuned to catch the official Munna Michael trailer on June 5, 2017 exclusively on Bollywood Garam.