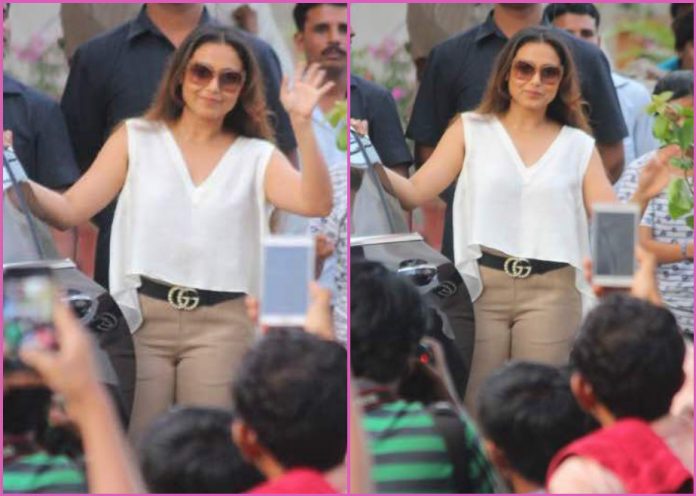 Bollywood actress Rani Mukherji is back to work after a long maternity break. The actress began shooting for her comeback film Hichki earlier this year and was snapped on sets in Mumbai on June 5, 2017. Rani was spotted exiting the sets where she interacted with her fans and even posed for photos with them.

The actress looked great in a white asymmetric top and brown trouser. The official Twitter handle of Yash Raj Films announced the wrap of Hichki’s shooting scheudule and even shared a picture of the entire cast and crew from it’s sets. Rani Mukherji’s comeback film has been directed by Siddharth P Malhotra and is being produced by Maneesh Sharma under the banner of YRF.

In an earlier interview with a leading daily, Rani Mukherjee talked about her return to films and said, “I was looking for a script that would challenge and excite me, and Hichki came my way. Each one of us has a weakness that pulls us back, it could be a disability or any condition but if we just look at it as simply a hiccup, we can emerge as a winner. It won’t come in the way of achieving your dreams. Hichki is built on this positive premise and I have decided to take it up.”