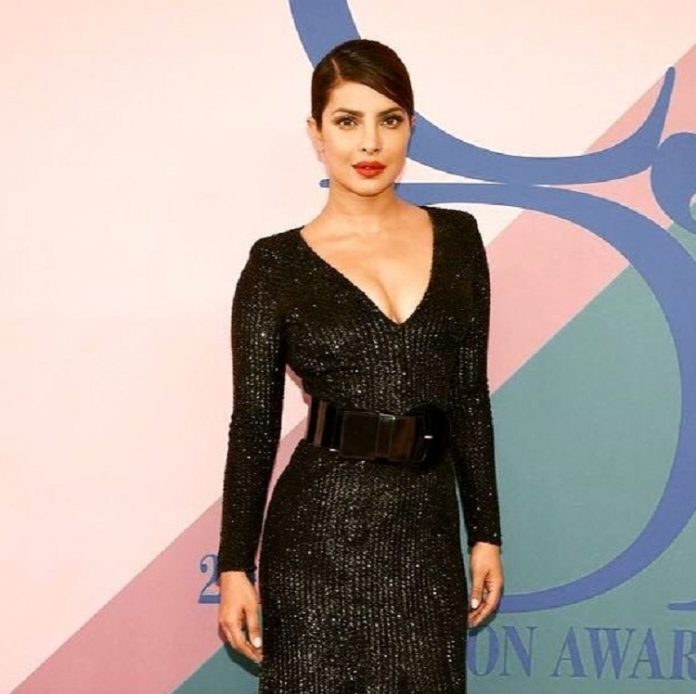 Bollywood actress Priyanka Chopra has now become an international star with her Hollywood debut, Baywatch. Her fans all over the world have liked her performance in the film. The international sensation has begun to hit some of the biggest and most prestigious red carpets – from Golden Globe Awards 2017 to MET Gala 2017 – she has been a stunner!

Recently, the actress attended a fashion event in New York. The 2017 CFDA – Council of Fashion Designers of America Awards was held on June 5, 2017, at The Manhattan Center’s Hammerstein Ballroom. Priyanka was all dressed up for CFDA Awards 2017 in a black dress created by Michael Kors. She looked sizzling in the black sequined gown that showed off her perfect curves as she walked down the red carpet with the designer himself by her side.

On the live stream of the official Facebook page of CFDA, the fashion designer Michael Kors described Ms. Chopra’s dress as, “A little dangerous, very New York, covered up and sexy at the same time.”

Priyanka otherwise, describes her dress as, “Give me a dress I can twirl in and I will twirl, who more classic than Michael Kors for me to be able to wear and come with? So I left it up to him.”

Priyanka snapped a picture with Michael Kors himself and shared the image writing, “Dear NYC, are you ready for this tonight? ? with @michaelkors for #cfdaawards”

Michael Kors’ shared a picture of Priyanka captioning it as “Sequin of events: @PriyankaChopra in #MichaelKorsCollection at the #CFDAAwards.”

Dear NYC, are you ready for this tonight? ? with @michaelkors for #cfdaawards

And she continues to twirl… #cfda @michaelkors

Fun nite with fun people. @thisisechambers u n I twinning with our sequins @armiehammer @michaelkors @cfda