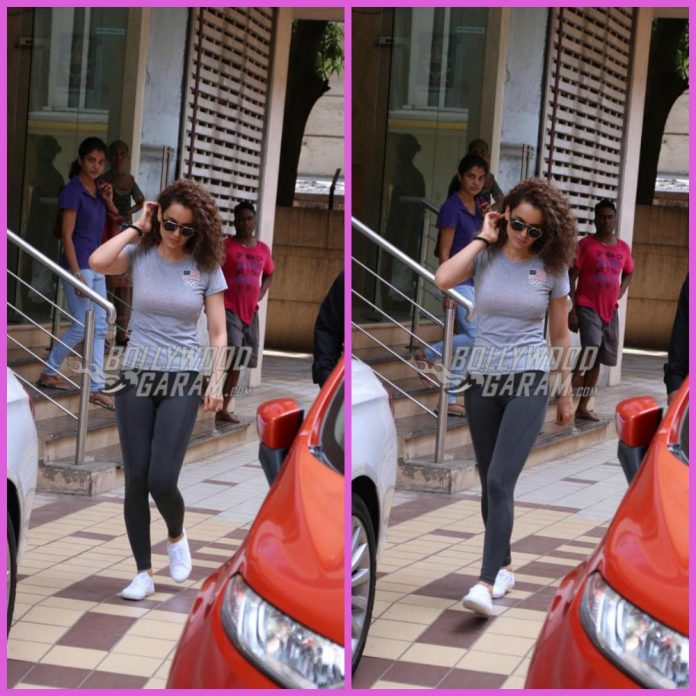 Kangana Ranaut is currently preparing for her upcoming film Manikarnika: The Queen of Jhansi. The actress was snapped after a sword fighting rehearsal in Mumbai on June 16, 2017. Kangana has always been paparazzi friendly and was seen waving for the shutterbugs as she exited the rehearsal studio.

The Tanu Weds Manu actress looked great in black leggings paired with a grey t-shirt. Kangana is currently practicing sword fighting for her role of Rani Laxmibai in the upcoming biopic. The actress is being trained by Hollywood’s action director Nick Powell. Apart from sword fighting, Kangana is also practicing hand combat for her role.

Recently the actress launched a 20ft tall poster of Manikarnika and made headlines after she was accused of stealing Director Ketan Mehta’s plans and script for Rani of Jhansi – The Warrior Queen for Manikarnika – The Queen of Jhansi.

The actress was last seen in the Vishal Bharadwaj’s Rangoon opposite Saif Ali Khan and Shahid Kapoor and will next be seen in Hansal Mehta’s Simran will releases on September 15, 2017. Watch the official trailer for Simran right here!