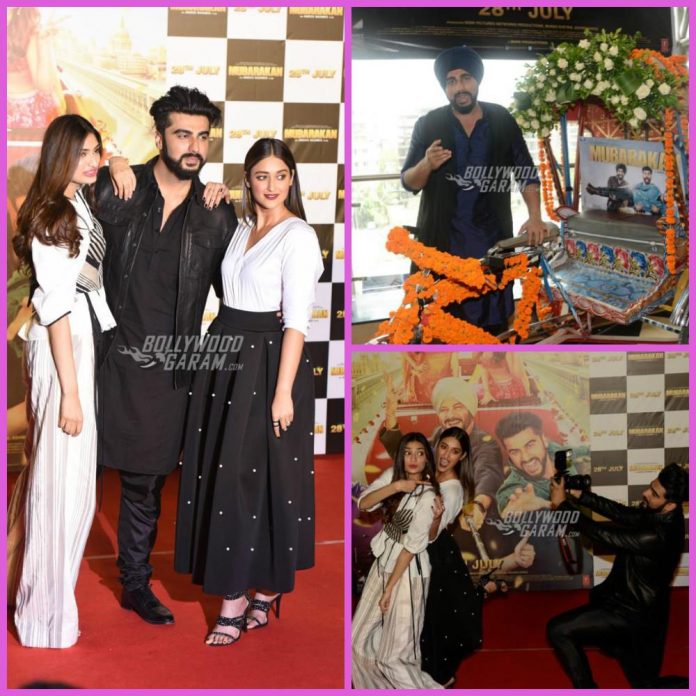 Makers of the upcoming film Mubarakan celebrated the trailer launch held in Mumbai on June 20, 2017. Yes, the trailer launch was no less than a celebration with the lead actors dancing away with happiness and excitement. The trailer launch event saw the presence of Anil Kapoor, Arjun Kapoor, Athiya Shetty, Ileana D’Cruz, Neha Sharma, Pavan Malhotra and Rahul Dev.

The celebration also saw the presence of director Anees Bazmi and producers Ashwin Varde and Murad Khetani. The launch event was turned in to a wedding-like atmosphere with the dhol players and wedding band. Arjun, Athiya, Anil and Ileana were seen enjoying to their fullest. The Ki & Ka actor was seen in the character of Charan Singh with a turban and ethnic outfits, while Anil was seen in a brown suit. Arjun, while talking about his character in the films said, “My co-star was like chahchu (Anil Kapoor), illeana, Athiya and myself. I have to double shoot, all of them finish their work and go home but me i have to shoot again in keeping the mind all the character. This job is very difficult to me to do so.”

Athiya looked elegant in a white jumpsuit while Ileana was seen in a white top and a long black skirt. Arjun will be seen playing a double role of Karan Singh and Charan Singh, who are twins but their personalities are like north and south poles. The trailer has shown Anil at his comic best and has the revised version of the classic song Hawa Hawa to give that perfect celebration-like feel.