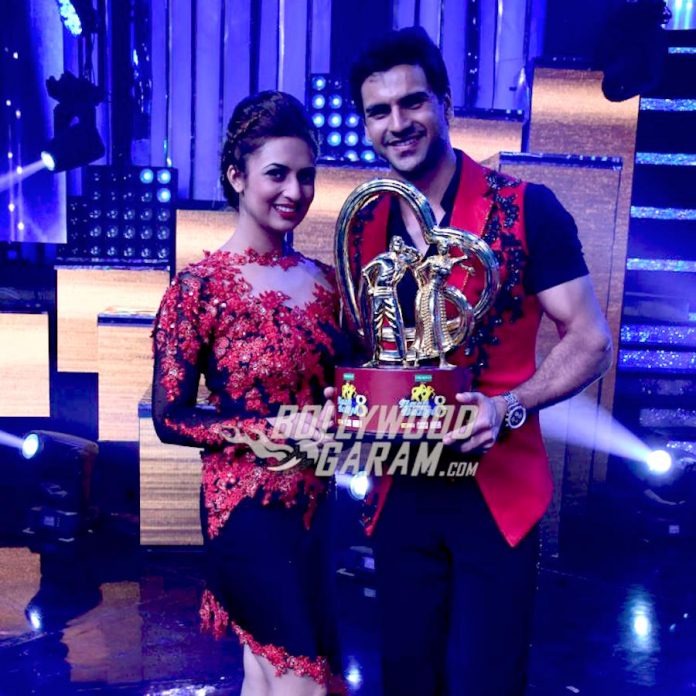 Popular tinsel town couple Divyanka Tripathi and Vivek Dahiya bagged the sparkling trophy on Nach Baliye 8 Grand Finale on June 25, 2017. Fellow contestants Sanam Johar and Abigail Pandey were announced as the first runners up while Mohit Sehgal and Sanaya Irani were announced as the second runners up. The couple, who will be celebrating their first wedding anniversary on July 8, 2017, said that they could not have had a better wedding anniversary gift than the trophy and Rs. 35 lakhs cash prize!

The winners were announced by actress turned judge, Sonakshi Sinha, who made her TV debut with the celebrity dance reality show. Divyanka and Vivek won the Nach Baliye 8 title along with a grand prize of Rs. 35 lakhs from Star Plus, Ora Jewelry worth Rs. 10 lakhs and a brand new Hero Maestro bike from co-sponsor Hero motors.

The couple has been one of the strongest contestants since the beginning and was also popular among the audience. Divyanka Tripathi and Vivek Dahiya managed to grab their spot on the grand finale after going through a lot of injuries and pain. This was also the first time, Divyanka and Vivek took to the dance floor and impressed the audience.

Divyanka and Vivek will be traveling to Europe to celebrate their first wedding anniversary and this time it will be a double reason for celebration! The duo also expressed that Nach Baliye allowed them to understand each other better as they had an arranged marriage and their journey as a couple has been memorable.

Nach Baliye 8 started in April, 2017 with ten dazzling celebrity couples from the television industry as contestants. Celebrity judges, Sonakshi, Mohit Suri and Terence Lewis had a great time being entertained by the contestants and also entertained the audience with their antics.

The Nach Baliye 8 Grand Finale was also attended by several other Bollywood celebrities including Ranbir Kapoor and director Anurag Basu who came over to promote their upcoming film, Jagga Jasoos. The entire star cast of Mubarakan too made their way for Nach Baliye 8 grand finale as they danced away and promoted their upcoming romcom. Sonkashi Sinha’s mother, Poonam Sinha too made a brief appearance on the show’s grand finale. But the biggest highlight of the show was Abigail’s beautiful and romantic proposal to long time partner Sanam Johar! The two got engaged on the show as Abigail went down on her knees and held out a ring as Sanam read aloud her love letter.