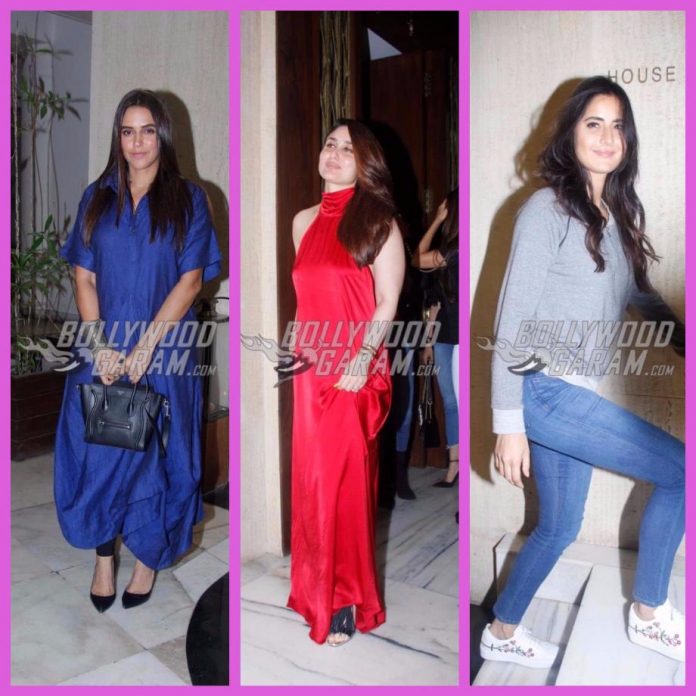 Celebrity designer Manish Malhotra invited some of his friends and colleagues for a little get-together at his residence in Mumbai on June 27, 2017. Some of the designer’s close friends including Kareena Kapoor, Amrita Arora, Katrina Kaif, Malaika Arora, Neha Dhupia and Sophie Chaudry made their presence felt at the bash.

Kareena turned up solo for the bash and looked gorgeous in a red outfit. The actress, who is currently a regular bird to the gym and on dietician Rujuta Divekar’s diet plan, glowed as she posed for the cameras outside Manish’s house. Kareena will soon begin shoot for the upcoming film Veere Di Wedding directed by Shashanka Ghosh and will be produced by Rhea Kapoor. The film will also star Sonam Kapoor and Swara Bhaskar. Bebo was last seen in Udta Punjab after which she went on a maternity leave. Close friend Amrita was seen standing next to Bebo in a white top, black leather leggings and a silver jacket.

Katrina Kaif, who is currently busy promoting Jagga Jasoos, appeared in casual with a pair of denims and a grey pullover. Host Manish Malhotra was seen in a classy black shirt and denims as he personally received all his high profile guests. Actress Malaika was also seen with a friend and was dressed in a black top and white pants. Neha Dhupia too made a stylish appearance in a royal blue outfit and completed her look with minimum accessories and a black bag.

Stay tuned for more updates on your favorite celebrities exclusively on Bollywood Garam.