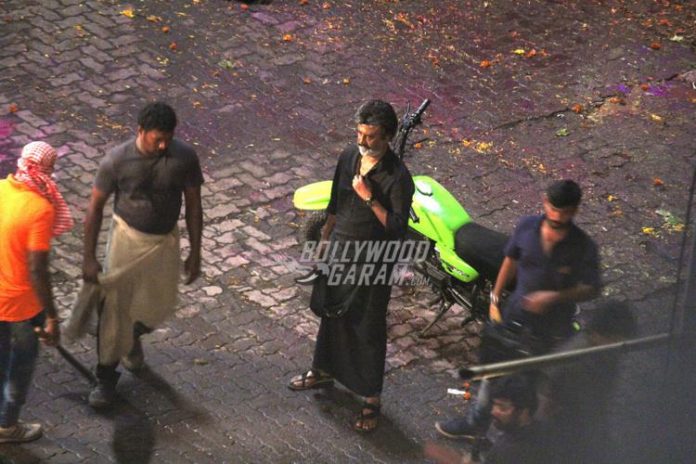 Rajinikanth’s upcoming film Kaala Karikalan have called it a wrap for the Mumbai half of the shoot. The south superstar finished shooting his part and flew back to Chennai earlier in June, 2017. But the rest of the cast continued to shoot in Mumbai. The cast and crew completed the shoot on June 22, 2017. The next portion will be shot in Chennai, where a replica set of the slums of Dharavi has been erected.

The makers of the film had earlier planned to shoot on real locations of Dharavi and but then realized that it was impossible. Even while shooting for Rajinikanth’s portions, the crew had a tough time managing the crowd as there was a risk of the plot being leaked.

Photos – Rajinikanth shoots on Kaala Karikalan the streets of Mumbai!

Rajinikanth will be seen playing the lead role of a slum-lord-turned-gangster. Major portions of the film will be shot in Chennai in a special set erected. The film also stars Nana Patekar, Huma Qureshi, Anjali Patil and Samuthirakani. Actor Pankaj Tripathi will be seen playing a cop. Kaala Karikalan will also mark the second collaboration of director Pa Ranjith and Rajinikanth after their film Kabali. The film is the sequel to Kabali and is expected to release in summer 2018.